Also known as Day of the Dead, Día de los Muertos is a day set aside to honor the souls of the departed. Whether it be as elaborate as a huge celebration of life, or a simple as a prayer or lit candle, the decision to do something holds tremendous significance. For those left behind, the death may have been felt as a force so destructive to their world that they too felt a part of themselves die.

I remember well the first time I participated in Día de Muertos activities. Gathered at Big Sis’ house, we celebrated (and mourned) the loss of not one but three lives. Blessed with good food, fun, games, and prayer, the day was one filled with lots of love. Of course there were many tears but, also, there was laughter.

For me, that day was perhaps one of the first of many significant days of healing in the life-after-death. The day was a reminder that not only is it possible to embrace life in the face of death, but that it is also a way to honor the departed. 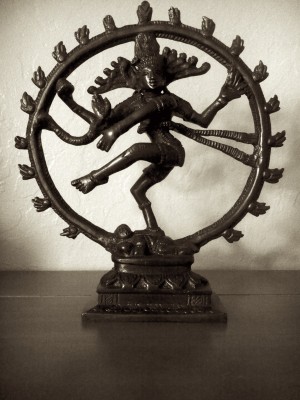 It has been said that Lord Shiva dissolves the universe for creation of the next cycle. While your initial thought may be a bad thing, if you change your view of the dissolution to a process, where death and rebirth are both constant, you may find it is a very familiar and not so scary thing.

I look at it in much the same way as how things seem to die off in winter only to return with new life when spring arrives.

When the seasons make me feel like I go through some sort of internal death-rebirth process, knowing that I will emerge full of life and new growth brings me much comfort.