I can’t believe that it’s already time to do my year in review post. From being showered by roses and realizing that it wasn’t enough, camping for the 1st time in many years, and going from two dogs to one, the year was one of growth.  It sure whizzed by in a hurry. 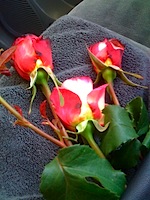 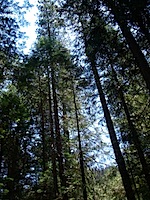 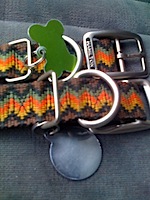 Here are a few of the highlights:

The year got off on the right foot with training for the Napa Valley Marathon (due to injury, my 2008 entry was deferred). Physically and emotionally, I put myself out there and learned some valuable lessons.

I continued training for Napa as best as I could and, when able, tried to pamper my lonely heartbroken self. Cautiously, I got back “out there“…a wee bit at a time. I was given the opportunity to help another by sharing the ways that others helped me after I lost my husband.

Returning to the place of my 1st marathon, and the marathon where my husband and I shared so much, I experienced Napa in a whole new way. I was a growing experience but it was far from F-U-N. But that was nothing when compared to my fight with the treadmill: I LOST. Then I was found.

As word of my treadmill acrobatics spread far and wide, I began getting quite a lot of attention. Roses were being left on my doorstep and, at the same time, I was earning a reputation as a bona-fide toe killer. Even with my new reputation as klutz and toe killer, I somehow managed to get showered with all sorts of wonderfulness (which I would later learn was too much and not enough at the same time). After my 1 month period of no running, swimming, biking, or doing anything post-concussion phase ended, I slowly returned to running. Oh, and my company was acquired.

I struggled with the scars (physically and mentally) left behind from my fall in March. Still, me and a few of my friends managed to run from Calistoga to Santa Cruz in just 3 days. The time spent with friends was just enough to allow me to forgive the little annoyances I’d identified in my new relationship, appreciate the undivided attention I was receiving, and dream of a future. I woke with a start to call from the islands reporting there was trouble in paradise.

YaYa and I traveled south when BoBo returned to the mainland for a visit. I began rebuilding one relationship while stepping back from another. As the month progressed from Father’s Day to Tom’s Birthday, I wrapped myself in the bits & pieces and memories of him.  I met Runner Susan and 21st Century Mom in Napa for a day of cycling and all things fun, went camping for the first time in forever, and began planning for another marathon. If that wasn’t enough, I filled the rest of my time with a running-themed quilting round robin.

I started off the month by ending the relationship which had been kept on hold status for over a month. There weren’t anymore excuses; he just wasn’t the one. I learned that my old dog’s days are limited and, as employees in my company began packing it up, I began wondering if my days were limited too. As a fun distraction, I ran a half marathon.

Admittedly, I was a bit stressed what with the job moving 30 minutes further away from home. I was less than neutral when Big Sis tried to fix the fluffiness I didn’t know existed. Then, after months of no contact at all, I was faced with Mr I. Don’t-want-a-relationship again and, once more, couldn’t get him out of my mind. I know; I suck!  I escaped my work and relationship woes with a trip to Southern California, ran with a guy I met on the Internet, bought myself a car, and celebrated YaYa’s 11th Birthday.

My job moved me into unfriendly territory. Unwanted friends came for a visit and stayed way too long. To add insult to injury, disagreement regarding BoBo’s Academy graduation arrived via email from the islands. Thankfully, I still had my running.  Pretending I was still on vacation proved helpful too.

For the first time every, I had a job which I HATED…completely. And things started breaking around my house. Miracles happen though.  My favorite brother fixed me up. Then, men arrived at my home by the truckload.  Of course, I did have to pay them.

I celebrated my anniversary with a long run, practiced the art of negotiation, crashed & burned then, with my BQ on the line, had to negotiate some more.

I kicked off my new job with a beachfront business trip, ran a marathon with Ms Claus, and soon after began planning the next marathon. I’m crazy like that. I bid farewell to the family dog, celebrated Christmas TWICE…and spent my Birthday in the “happiest place on earth.” 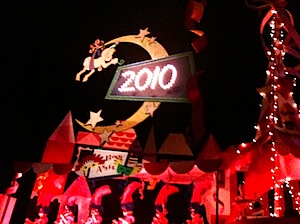 Now, here we are in the final day of the year — already.

While BoBo is visiting from Hawaii, I am slowing down to savor each moment before it passes. Soon, he’ll be flying back to the island for a semester of community college followed by entry into the US Air Force.  I’m so proud of him.

I’m proud of YaYa too.  He’s been the young-man of the house, in addition to his roles as son, student, child, etc.