Shortly after running setting the goal to qualify for the Boston Marathon, the idea of memorizing the achievement with a tattoo was introduced to me. A couple of my colleagues had memorized completing their 1st ironman distance triathlon by tattooing the IM logo on various parts of their bodies. While my friends’ tattoos were proudly and prominently displayed, I decided that IF I were to have one placed, I would be a little more private. After all, it would be for me, not for anybody else.

After the Santa Barbara Marathon, Mark had a tattoo placed in celebration of his 1st marathon. I stood beside his wife and watched the process. Slightly under the influence of two kamikazes and one rather large beer, it seemed ever more like a good idea and appeared to be pretty painless from that vantage point. But I didn’t want to permanently place just any random picture on my body. What ever I choose needed to have meaning.

I began the search for the special symbol and stumbled across Celtic spirals. I knew I was onto something when I read about their symbolic meaning: balance, direction, and awareness. I played around with them for a bit — doodling here and there — trying to come up with some creative way to incorporate the spirals into something more familiar. I came up short.

No matter how or what I drew, the symbol was either swallowed up by the rest of the image or the image itself took away from the meaning. After deciding on a particular Celtic spiral: the triskelion (also referred to as triskele, triquetra or fylfot) I knew that it was not meant to be buried in the wings of a butterfly or anything else. It was perfect all by itself. 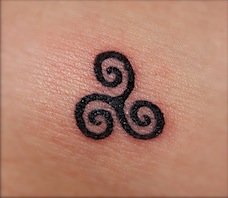 The triskelion has two components: motion and triad attributes. Each component (together and separate) are equally symbolic and powerful.

The trkskelion’s branches (or legs) give it the appearance of forward movement. No matter which journey, be it my path forward after my husband’s death or my quest for Boston qualification, this forward motion represents the need for balance, direction, and personal awareness.

As for the three protrusions (legs, angles, branches), these can signify a variety of triads including any (or all) of the following:

Interestingly, once the symbol was chosen, I was ready to have it placed. But I needed to qualify 1st. That was, after all, the plan. Still, there was a point where I felt as if the tattoo itself might be a part of the journey and I nearly made the mistake of putting the cart before the horse. I’m glad that I waited.

This is the closest you’ll ever get to seeing it. I think it’s pretty sweet.