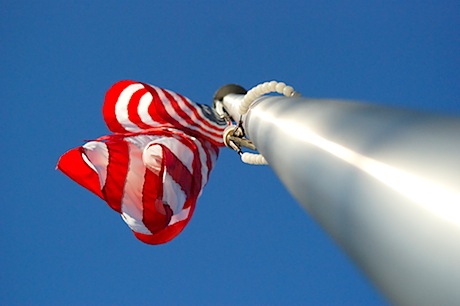 Watching the American flag wave and sway is something quite lovely. There’s so much more that a picture just can’t capture.

My morning started off searching the garage for an umbrella. Living in California, it never seems to rain hard or long enough to bother with carrying the thing. Until today. I never found the thing. Instead, I found a little wooden box.

Looking somewhat familiar, I reached to the back of the shelf where it had fallen and opened it up to inspect the contents. The contents met me in much the same way as I’d imagine opening up a of worms might be like. Inside were small pieces of paper with 1-2 words written on each – in MY handwriting. Words like pain, distractibility, anger, fear, indecisiveness, and feeling: it’s not enough were just a few of the collection of negative energies this support group exercise was supposed to help us discard. Or maybe we were just storing them up for a day when we were strong enough to meet them face to face.

As I drove off for YaYa’s game, I questioned whether today was the day I was strong enough. Tears ran down my cheeks as a fresh wave of grief hit. I likened it to being rear ended by a truck.

I remembered the clever wording Tom pulled together for YaYa’s birth announcement – noting how football coaches were being interviewed while YaYa spent a week on the injured list (actually he was in the ICU). Then I thought about how Tom used to watch all of BoBo’s games. He was SO into them – video recording them and then reviewing them post-game with BoBo. I wondered about what I had to offer when the reality is that I can barely keep track of when YaYa was on the field let alone provide kudos or critique.

And although I know that Tom might very well be watching from above, on this gloomy and wet day, that does very little to comfort me.