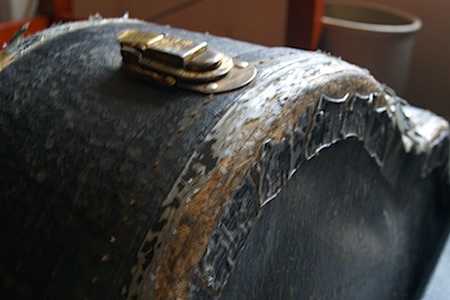 You could say that I was just a wee bit stressed out about my upcoming race. That IS until two talented men distracted me with a little music. It was finger pickin’ good!

Before running CIM (2007), Coach Jeff thought it good that I was so relaxed. It was, I suppose, because when the foot pain caused me to slow the point of wanting to DNF — thus missing yet another BQ — I was not devastated. By then I had come to learn how insignificant achieving Boston Qualification (BQ) was in comparison to all that 2007 had dished out. However, 2007 was three (nearly four) years ago. I’ve made further attempts and have experienced many more failures.

Today, as I feel relaxed with intermittent bursts of frenzied worry, I wonder if I’ve gotten used to just running the marathon rather than racing it. I listen to Jeff as he tells me “remember, your racing this. you’re not running it…” and I wonder if that part of me died with my husband or if it can still be accessed.

Last night I was asked “Why haven’t you qualified after 16 marathons?” I had no answer. Honestly, do we ever know the why of anything? Why did I get blazing hot temperatures at Chicago 2007? Why did I have stomach issues, a foot injury… why didn’t the stars align?

I think back to those days: crying in later miles when I found myself unable to keep pace, my body moving slower and slower with each passing mile. How well I’d run to that point no longer mattered. My BQ was lost and I was devastated. The failure consumed me for the several days that followed. As I remember, it starts to consume me once more.

I fall into this sea of failed BQ attempt and start to drown in it. And while I do believe that a little analysis of prior failures is fine, it’s only okay to willingly go down into the sea pain if you pull yourself back up.