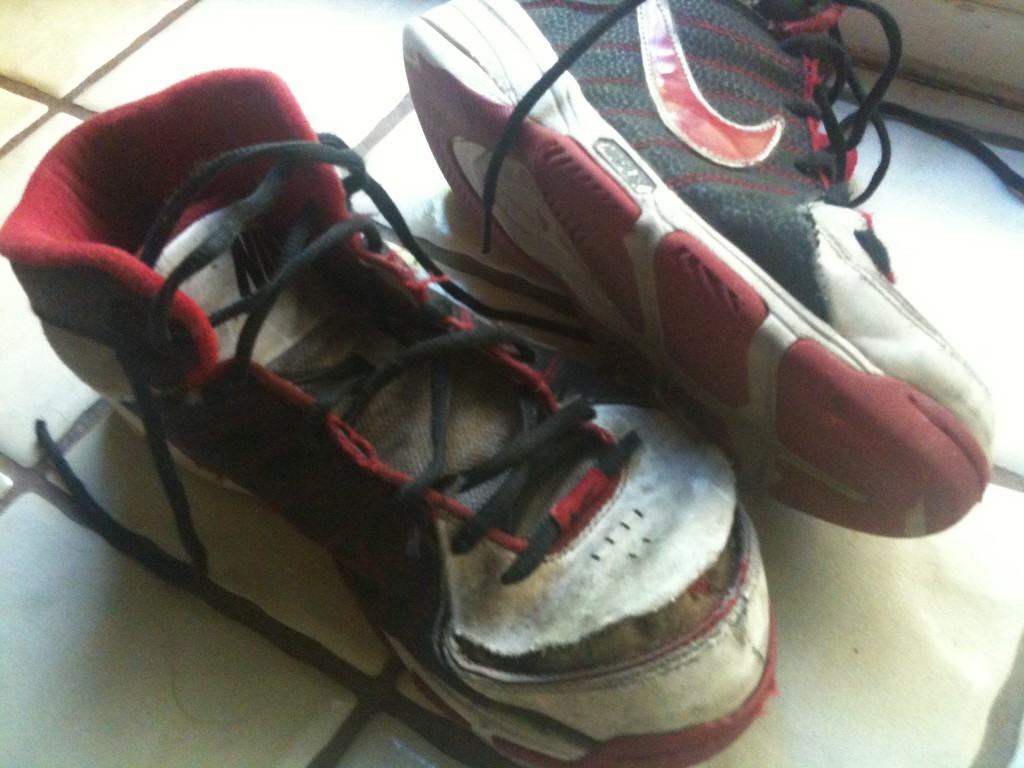 I feel a lot like these shoes but please don’t throw me in the garbage can. I hope to be feeling better soon.

My apologies to Garmin; this post is long overdue.

When I received Lil Miss, a women’s-specific running watch (FR60) made by Garmin, I was pretty jazzed. I had high hopes for my new running partner and wanted to give her my best review possible. This was last October (2009.)

As you may know, Ms Garminia (Garmin’s Forerunner 405) is near and dear to my heart. With her own page on my blog, where I refer to her as my #1 training partner, it’s pretty clear that Lil Miss had a tough act to follow. You could say it’s similar to my following in Big Sis’ footsteps where comparison was inevitable even though I hated it.

Lil Miss (FR60) does have a lot going for her. Her women’s-specific sizing makes her sit nicely on my small wrist. Unlike Ms Garminia, Lil Miss is petite and with a stiff but flexible band. Not only that, with a 1 year battery life, Lil Miss is always energized and ready to go when I am. I can’t always say that about Ms Garminia who, claims exhaustion more often than not (read: I often forget to charge her battery.) And while they both help me to monitor my heartrate during my runs, both measure cadence during my bike rides, there is one major difference. Lil Miss does not have the GPS capabilities which I associate with Garmin products However, there is a footpod accessory available with some models.

Like Ms Garminia, Lil Miss (FR60) communicates to the computer using a USB ANT Stick. It’s a pretty sleek way to view all your workout data in one place. If you’re at all like me, you’ll love the ability to see the numbers clearly noted including time, heart rate, calories burned, lap times, etc.

Both use the ANT+ technology in the system to be able to communicate with various devices such as the included heart rate monitor and the foot pod (which I will get into a bit later.) The FR60 takes it one step further with the ability to also be used with other ANT+ compatible devices.

If there is anything that sets this running watch apart from the rest, I think the ANT+ to compatible workout equipment feature would be it. Unfortunately, my gym does not carry any of the compatible devices.

I’ve only had the opportunity to see it in action while visiting a friend’s gym where the spinning cycles were ANT+ compatible. Although I was able to view my heartrate on the spin cycle, I am sad to say that I was not successful in getting things hooked up correctly to allow for the transfer of speed, distance, and cadence to the watch as I had hoped. Perhaps if I had known ahead of time, I would have been better prepared. If I ever figure it out, I will follow up with another post.