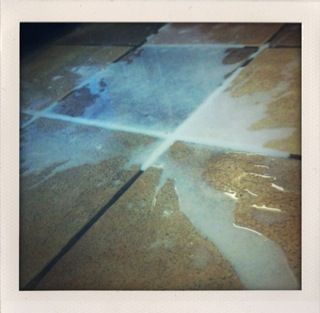 My colleague at work asked me how I’ve been able to be so positive after all of the curve balls that have been thrown my way in the 3 past years (i.e. my husband’s death, the breast lump scare, being laid off, teenager troubles, blah blah blah…) I reminded her that things were actually pretty good these days. She acknowledged that before noting that she has “never” seen me angry or depressed at the challenges put in front of me. I took it as a compliment as I have done my best to cling to the good while getting past the bad as quickly as possible.

If you’ve followed this site for any period of time, you know that I’ve experienced much anger and depression during these past years. I guess I’ve hidden it well in my everyday life. Certainly, I’ve tried not to dwell on it. Get it out in a blog post and then try to move on about sums it up.

There’s no sense crying over spilled milk. Just wipe it up and pour another glass.

I made a note on FB today which yielded the response “Yeah, whatever.” I must admit, I was taken aback. Sometimes, calling out the positives can be misconstrued as rubbing it in others’ faces. Truly that was NOT my intention.

But why did I feel the need to post that I was still smiling from a compliment made in the morning? Perhaps it was because my last few posts ones of complaint about everything from the toilet seat being left up to our house phone ringing after 10 pm. Maybe it was because I was asked why all the secrecy regarding my love life. I suppose I just wanted to share. What is wrong with that anyway?

In this world where seemingly more and more couples have nothing nice to say about each other, I find it refreshing to see this sort of stuff. And when the opposite is witnessed, I am very uncomfortable – especially when the complaints seem to be firing rapidly as if they were shot from a machine gun. I look on and wonder if I was like that too in my marriage. I sure hope not. Moreover, I hope that I am never at a point in a relationship (with ANYONE) where I have only complaints and never compliments.

This week, I find myself repeatedly in situations (work mostly but home too) where I need to point out an issue in need of a solution. I’ve received a whole lot of push back and have found it challenging to remain neutral, point out specifics, and request clarification or action. It’s been difficult to persist when appropriate but also quell my frustration. As the saying goes, if you can’t say anything nice, don’t say anything at all.

And I suppose, when you can’t muster the best response, the next best thing would be “Yeah, whatever…”