As Vince so aptly put, “Anyone who runs Boston forgets the pain of the race, and remembers the kindness of those good people who welcomed us.” I too have been trying to process the horrific scenes of the bombings at the Boston Marathon which have been crossing my computer screen over the past 48 hours. There are no words to describe the cruelty that unfolded there. Nor are there words to adequately describe the outpouring of compassion that has come of it. If these terrorists were attempting to divide us, their efforts have failed.

All over the nation people are finding ways to support those affected by these tragic events. There are many ways. For me, this will come in the way of a blood donation. How will you help?

Memories of my trip to Massachusetts to run in the Boston Marathon are stimulated this morning as I watch the Boston Marathon posts hit my FB feed. I think back to that grand adventure — my gracious host, the sights and sound of Boston and the surrounding areas, the bus ride to Hopkinton, the RACE itself with its ups and DOWNs, and seeing Ryan and Kurt W. — and smile.

Today, I sit at home, missing the bus ride to Hopkinton, and reflect.  It was such a beautiful experience. One built on 9 hard years of blood, sweat, and many tears. I don’t know if I’d appreciate it the same way if it just came easy. Who knows? All I know is that I look back at all the hurdles put in my way and smile with the deepest of pride.

END_OF_DOCUMENT_TOKEN_TO_BE_REPLACED

On Monday, when I first heard that Boston Marathoners had been offered deferred entries to the 2013 running of the marathon, due to the hot temperatures occurring on Patriot’s Day, I was angry. Of course it didn’t help that I’d read the inaccurate account of nearly 4,000 runners taking the BAA up on this option. I believe the real number was re-estimated to be just over 400.

My unpublished rant when something like this: “I cannot believe it! I would have raced in this year’s Boston Marathon! But over 3000 decided it was just too hot. It sounds like they will be allowed in next year’s race. I guess that’s what the cream of the crop deserves: easy registration and easy on the body race conditions. So not only will they beat qualified but not-fast-enough folks like me out in this year’s race but next year’s race too.”

You could say, I was less than neutral. Indeed, I am embarrassed to say, I was a bit OUT OF CONTROL and IRRATIONAL. I went to a yoga class to bask in the heat (98?F)…and found a little humility. Obviously, I needed some.

During my practice, while I slipped and slider around in large puddles of my own sweat falling to my yoga mat, I thought about the couple of times that Mother Nature had turned up the heat on race days where I had been the one toeing the line. First there was Grandma’s Marathon (2006). Never before had I seen the Black Flag equipped with skull and crossbones waving at the start. Let’s not forget the disappointment of the Chicago Marathon (2007). Certainly these were not the most pleasant of races for me. The heat robbed me of my plans to BQ for sure. But that *is* the nature of marathoning, now isn’t it? We pray that the “stars will line up just so” and, when they don’t, we deal with it.

I could only hope that a race as well respected as Boston would support its participants’ safety as best as possible and that those participating would toe the line with a healthy respect for the conditions of the day.

All the Boston Marathon stuff was nearly forgotten until this morning when I met up with a woman at the local coffee shop. Her BAA clothing sparked my interest, as it always does, and I struck up a conversation with her asking how the race was. I expected her to say that it wasn’t all that bad but that was not how she responded.

Her account confirmed that, even with a Wave 1 start, the conditions were such that any dreams of a pleasant race melted away into no more than a puddle of sweat while she was still at the start. However, she noted that the race support was just as stellar as it always is in Boston. The BAA and event organizers were well prepared for the heat and provided plenty of water and cold sponges. The typical wall of spectators lining the way from Hopkinton to Boston were also out in force, providing fresh oranges, cups of ice water, and the typical words of encouragement they are known for. Unfortunately, and not surprising given the heat, all of the aid stations from start to finish were busied with all of the marathoners suffering the effects of the increased temps.

This woman’s account of the race once again had me thinking back to how I felt during and after the two marathons where I’d experienced similar conditions. It was definitely NOT pleasant. It was physically and mentally defeating. Yet, I don’t regret deciding lining up on race day. I think I would have been more likely to regret choosing not to line up. But that decision is not for everyone. So while I was initially angry that the BAA was encouraging those who thought it best to opt out on this year’s race, I commend them for having a pre-defined deferral policy that gives runners an option to decide what is best for them not just this year but on any given year.

Although I regret entertaining the hostile and irrational thoughts, I do know that I would have toed the line this year had I been in the running – no matter if the stars aligned or not. It may not have been as fun as last year’s race but I would have been there.

I only hope that, if I am able [correction: when I am able] to hit the new BAA instituted BQ standards, I am able to gain entry into the race. It would surely be a bummer to jump through the hoops, which are now lite with fire, only to be told that once again my well-earned achievement is just not good enough to run their race.

END_OF_DOCUMENT_TOKEN_TO_BE_REPLACED

Earlier this week, I received email regrets from the Boston Athletic Association (BAA). Like Starkist being picky about it’s tuna, the BAA is picky about who they are inviting to next year’s party at Hopkinton.

Well, I’m not rushing out to jump through the new fire lit hoops they’ve set out as the tougher qualification standards only to be on the invited list again. Some day, I may be happy to play that game, but not now.

As you know, I don’t do well with the “not good enough” message. I’d rather go where I’m wanted. The question is: Where is that?

I’ve been watching the BAA registration and Facebook page for updates on registration for the 2012 race. Honestly, I’d love to be in the running to be there on Patriot’s Day 2012 to “race” not “run” the Boston Marathon. The way things are looking, it’s not going to happen. With the new registration process, I don’t stand a chance. 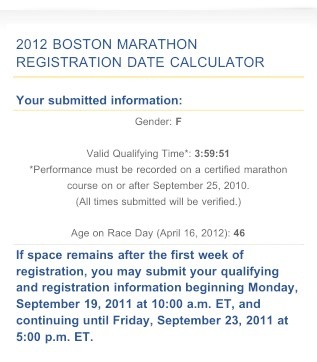 I’d be lying if I said that I didn’t care. To be perfectly honest, I am truly disappointed. Last year, after pushing myself harder where I ever thought I could, I BQ’d with the knowledge that I’d have a shot at not one but two Boston Marathons. It’s the magic of timing your race within 18 months of two Patriot’s Days. I never dreamed that the rules would change.

I know what you’re thinking and, yes I did run in this year’s race. Call me greedy, but I want to run again…on the same BQ used to run this year.

I’m okay with the BAA changing the qualification standards for 2013 and onward. I understand their need to make some changes. It’s the tiered registration process that I have an issue with. No, more accurately, it’s the sifting through the registrants who have jumped through all the hoops set out before us (the BQ, waiting our turn to register based on the amount of cushion in our BQ) to find the cream of the crop. It’s a race; it’s not the Olympics.

Well, what do you think? You can be honest. Tell me if you think I’m FOS. Just give me the rationale for your thoughts too.