Memories of my trip to Massachusetts to run in the Boston Marathon are stimulated this morning as I watch the Boston Marathon posts hit my FB feed. I think back to that grand adventure — my gracious host, the sights and sound of Boston and the surrounding areas, the bus ride to Hopkinton, the RACE itself with its ups and DOWNs, and seeing Ryan and Kurt W. — and smile.

Today, I sit at home, missing the bus ride to Hopkinton, and reflect.  It was such a beautiful experience. One built on 9 hard years of blood, sweat, and many tears. I don’t know if I’d appreciate it the same way if it just came easy. Who knows? All I know is that I look back at all the hurdles put in my way and smile with the deepest of pride.

END_OF_DOCUMENT_TOKEN_TO_BE_REPLACED 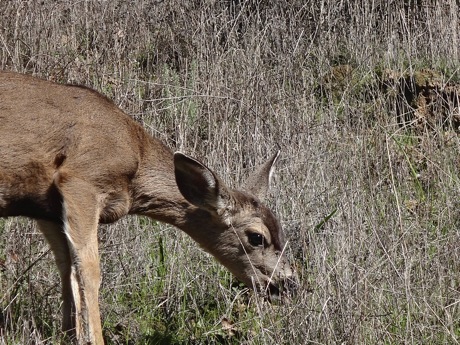 Slowly, very slowly, I am feeling improvement. I proceed forward, however timidly, like a young deer setting foot out in an open field. I know I am vulnerable to another backwards spiraling. I just can’t afford that. I take two step forward, and hold my breath…

Those of you who have spent any amount of time with me know that I am a bit superstitious. Not to the point of holding back (much) but certainly preceding with a bit of caution with things such as when walking on the opposite side of a pole as the person I am with. I refrain from celebrating things such as Boston Qualification, successful refinancing of my home, or anything of the sort, until the documentation is in and it is 100% true. Even then, I have a tendency to look for some wood, be it a picture frame or desk, to knock on. If none is available, I will knock on my head… and say a little prayer as well.For my 47th birthday (yes, I am that old), a friend of mine gave me a little piece of wood to carry with me for such occasions where wood is wanted. This was not just any wood; it was wood from last year’s Christmas tree (2011) which he had saved to carve out a family ornament for the following (2012) year. And because he has similar perfectionistic tendencies as yours truly, he sanded, stained, and varnished my little knock-on-wood piece into this beautiful little ornament. 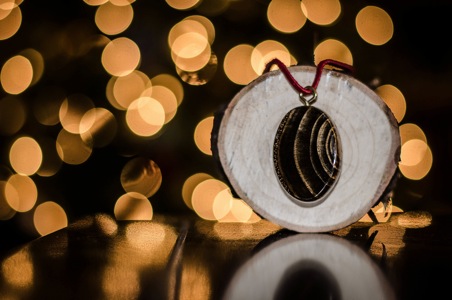 He hoped I like it.Of course, you *know* I LOVE IT!Since receiving it, I’ve been relieved to have a bit of wood nearby at all times. This was especially true yesterday, when I bared my sacroiliac and the surrounding territory for a cortisone injection. I knocked on it several times prior to the procedure, and immediately after with hopes that my pain soon melt away completely and not return. [knock wood]During the procedure, my nerves were calmed as I practiced my pranayama (yogic breathing) and took comfort in knowing that the love of my life was out in the waiting room waiting to take me home. I imagined he was holding my hand as the needles (first the numbing agents and then the cortisone) were being inserted.And now that it is all done, I ask ALL of you to please find a bit of wood and give it a little knocking with the hopes that I can resume my active life free of pain.Namaste (I bow to you — with gratitude)

You always hear people say how important it is to choose your battles wisely, in any relationship, but most especially while raising children. This same caution can be practiced across the board — even in your relationship with your own body.

In rolling out the mat these days, I find that force my body to adhere to the exacting ashtanga flow may not be a battle worth fighting right now.  This is especially true when trying to insist upon keeping up with the regimented count. Sometimes I hold my breath, longer than I want, just to hold off in progressing to the next pose. It’s not good.

Like having a war of wits with a terrible-two-year-old, reasoning just isn’t the best mode of action. Similarly forcing the issue, as I have been guilty of doing with YaYa lately, is no more successful. It doesn’t work on him, nor does it seem to work with my body.

Those moments when one discovers that they have let their self get so caught up in the battle, purely on principle, are sad moments. But it is the times where the discovery is not made which are worse. They lead to complete and utter frustration for all involved. And, sometimes, people get hurt.

But we are talking about yoga here.  Aren’t we?

Deciphering which battles need fighting (or coaxing at least), and which ones really don’t need to be mandated, is not always as clear as it should be. I can’t always tell which aches can be worked through and which need me to abandon the effort.

As with everything else, I’m learning to put an end to the seemingly constant battles on and off the mat… or at least I’m trying to.

My back has been complaining more than usual. Correction: I’ve been “more aware” of my back’s complains this week. It may be complaining just as much but how I’ve reacted has been different.

The first reason for the acute pain may be that I’ve been denying myself the use of ibuprofen. Instead, I’ve been reaching for topical arnica. Honestly, it (arnica that is) doesn’t seem to do much to alleviate the discomfort. But I’ve been on this no-NSAID kick for a couple weeks now. It’s only this week that seems to be the issue.

The bigger change this week is that I have backed off from my daily yoga routine. It’s not been on purpose. Well, not completely. There’s been a bit of competing activities requiring me to miss out on my routine: sprained thumbs from gaga ball at camp requiring doctor’s visits, cavities to be filling (now that school is out), backpacks to be loaded, and more. Additionally, I’ve been entertaining the idea that I need to rest my back for the demand of playing pack mule for 6 days. Then I think about how my trial runs carrying a fully pack have left me feeling strong and healthier than 8 hours sitting at my desk has.

And what do I get for my yoga abstinence? END_OF_DOCUMENT_TOKEN_TO_BE_REPLACED