It’s hard to believe that it’s been 6 months since I’ve done any sort of real running. 6 MONTHS! For someone who has essentially been running all of her life, that’s a mighty long time.

I’m thankful that I had my century training to distract me from the self-pity that has accompanied all other forced hiatuses from running that I’ve had. I might have been a wreck otherwise. Instead, I was pretty absorbed in learning the sport of cycling. I also think it’s pretty cool that this sport I previously called my “bad sport” has become one that I truly have learned to love. My bike has been hung up since the ride but this is not due to a lack of desire to climb aboard; it is due to time constraints.

I have a little over 3 weeks left to train for the Big Sur half-marathon and very little in the way of miles run on the books. And although I have many years of experience, my return to the sport has not been easy. 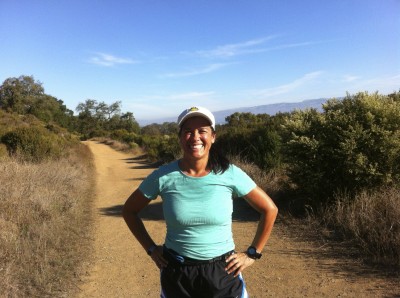 During this past week, I have stayed on track or trail – keeping the pounding to a minimum. I’ll have to put in some pavement training but, at this point, I just want to get out.  I’ve worn a combination of vibrams and running shoes (rigid insoles previously worn replaced with the softer inserts that come with the shoe). So far, it’s worked out.

As before, I pull my hair into a pony, pull on my favorite run-wear, and set out with a set distance in mind. I greet each passerby with a friendly “hello” or “morning,” as I go. I’m playing the part of a regular running, but I’ve yet to find my groove. I know it will come…in time.

Until then, I’ll just fake it.