You may remember that a while back, my department began a team building exercise of making wine. Or maybe we are simply making winos out of ourselves. Anyhow, we’ve sorted, pressed, percolated, completed blending trials, and FINALLY… the fruits of our labor are ready to bottle up and take home! 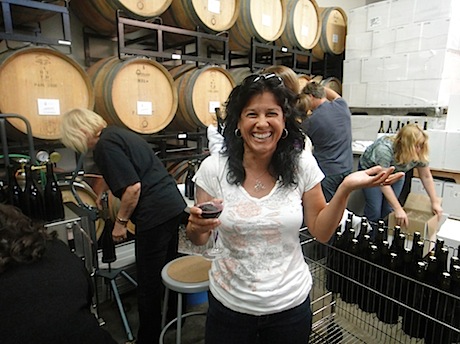 Of course, I’m thrilled. Does it show?

“…in the end it’s better to say too much than never to say what you need to say” – John Mayer, Say

In a time where our youth is finding trouble more often than before, I feel so blessed to have organizations such as YaYa’s football and cheer organization. Unfortunately, the homeowners residing in the homes beside the field have recently complained about “noise” polluting their Sunday afternoons. We aren’t talking gunfire and screeching tires, folks. This would be clapping and cheering!

It’s not like we’re new to the neighborhood. The high school where we play opened in 1962 and this season marks our 4th year on campus. You would think that anyone who chooses to purchase a home beside a high school would expect to hear “noise” from sporting events, band practice, and the sounds generally heard where there is a gathering of youth.

As you may remember, I signed YaYa up for football thinking he only wanted to do it because his older brother wanted him too. I figured he’d hate it and I’d never hear about it again. Four years later, I find that it is so much more than an extracurricular activity. For that, we stick with it in spite of a schedule that feels near impossible to manage.

Football provides my son with the physical activity which keeps his body healthy, but also helps him to develop into a well-rounded, confident individual who will be better equipped to work well with others. He isn’t just learning the rules of the game; among other things YaYa is learning that rules, in general, are there to keep everyone safe.

The coaches and parents from the league are part of a bigger community that comes together for more than just football and cheer. Much like a church community, we support each other, provide our children with encouragement and a network of families who truly want to be present in our children’s lives. With events such as our 9/11 Remembrance, honoring our local heroes, and an event for breast cancer awareness, the league proves to be about more than just football and cheer — and more than just our youth.

With all the destructive pulls in the world today (i.e. gang activity, drugs, alcohol, theft, vandalism), organizations such as this one should be encouraged rather than shot down because of a little cheering. I sent my viewpoint to the school district’s board of directors. Whether others will do the same is unknown. For YaYa, it doesn’t matter a lot. Most likely, he won’t be playing next year. But for others, now is the time to speak up.