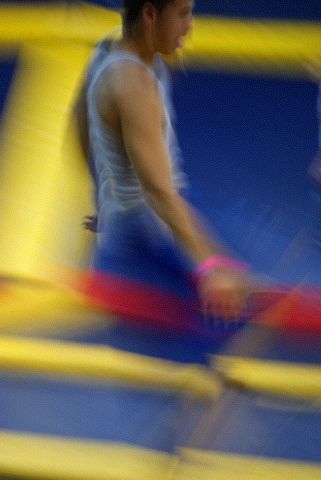 Sometimes, you must do what ever it takes in order to nab quality family time. Today, that meant heading off the the trampolines for a 2-hour session of jumping as soon as I’d finished my 20-mile long run. We had a blast but oh was I ever sore.

BoBo has a playful side to him that can only mean one thing — when you come down, he might time his jump to send you flying. *sigh* It took me a while to let down my guard. After a bit, I was flying high too.

We took our turn at dodgeball too. This would be dodgeball played on trampolines. It’s quite fun…I think. My throws kept getting caught putting me out of the game.

We did a few rounds of dodgeball before going back to the trampolines. At this point, YaYa was climbing the walls and BoBo was doing back flips. I can’t say that my tricks were as fancy.

I was just having fun being with my boys. Tomorrow, BoBo heads back to the island.

On Friday, I was told that I was indefatigable. I had to look it up to determine if it was a good thing or a bad thing. I suppose, like almost anything, it can be taken either way depending on the context.

During Saturday’s long run, I tried to access any indefatigable tendencies. If you’ve got it, then use it. Right? If only it was as easy as deciding that.

The trails were tough. I haven’t been able to enjoy them enough these days. Venturing out for a 20 mile trail run, however, proved both exhilarating and exhausting.

Truth be told, fatigue was setting in. However, the solitude and sounds of nature were just what I needed. Running one of the less popular trails, a brief chat with a backpacker loaded up with weight for the sake of training for Mount Whitney (he’s entered into the lottery) after 10 miles of climbing provided just enough human contact to not feel isolated. Of course the decent was nothing more than exhillarating.