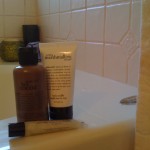 It would appear that I have done a virtual throw up in my blog in a manner much like my status updates on In-Your-Face-Book or Twitter. I write often because the world just might want to know useless facts about what I am doing, what I have been doing, and what I will be doing.

For example, I am sure that you want to know that I now have a new body gel and cream from Philosophy which I received as a Christmas gift. They smell like something if eaten would lead to an increase in body fat. So, it would seem odd to be cleansing in “hot cocoa”, only to follow by rubbing “marshmallow cream” onto my body after I having dried off. On one hand, it is a little fun. On the other, I can’t help but think how much more fun it might be if there was someone close enough to notice.

Such is life: my life. And now you know — another useless fact about me.