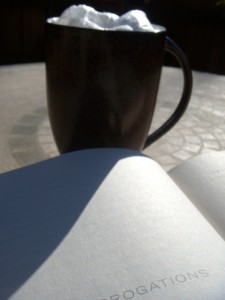 I sat in the sunlight with my book and a cup of coffee, I began drawing parallels to my relationship with L. I became further engrossed in the story, although there were time where I wondered if I was absorbing any of it all…

In the early stages of my friendship with him, L had noted that he was “dangerous.” Certainly, he is no vampire; there is no comparing the danger which L spoke of to the risk of death the character in this story continually risks. I relate to the way that she cannot resist him, even after giving the risks her careful consideration. Just as I am drawn to L, she is drawn to him despite the dangers.

Sometimes, the characters let their guards down thinking that the danger has left them. Doesn’t the moon, or the time of day, play a part in the extent of danger that exists?

It is an easy thing to deny danger.  In the bright of day, L stayed with me while I stretched after a long run. When I was done, he kissed me. It was innocent at first. I took it in, knowing that the breaks would soon be put forth — though I hoped they would not.

Moments later, his kiss moved to my neck where he began suckling the salty sweat. I let him. It felt good. At that moment, I would have let him suck blood from my neck if he wanted to. But it stopped as quickly as it started.

In the time that followed, each of us watched as desire fought against danger. When the breaks got placed once again, I questioned whether L was protecting me from hurt or himself. It mattered, for I wanted to protect him from pain, yet was more than willing to let desire win over the risk of my own. It then occurred to me that perhaps self danger is not enough to hold back against the possibility of experiencing love. Maybe it is the love itself that helps one to hold back and allow the danger to lesson. My want is strong, but my love is stronger.