Friday morning, I hopped on my bike for my first real ride in nearly two years. Big Sis, Big Bro-in-law, their children, Mom, her new hubby, L and me all set out for a bike ride. It started out easy, allowing me time to get reacquainted with Donna (otherwise known as my bike). A short time into the ride, we passed the “hill” and began heading in the opposite direction. It wasn’t long before Big Sis and L suggested that we take the hill on our own and regroup with the family afterwards. I looked back at what seemed like a short but very steep climb. Big Sis and L were nearly drooling as they waited for my answer. I nodded and they were off to attack the hill.

Right away, I was sucking wind, my quads were burning, and I was in my granny gear. I thought about abandoning the effort but kept on. As I passed a few joggers who where heading in the opposite direction, I began longing for my running shoes. The entire time, it felt like I was on the verge of falling over. With just a bit more to go, L returned to offer me encouragement. It worked. Just moments later, the road leveled off.

At the top, the decision was made to continue on. Big Sis was sure that we’d be able to meet up with the family on the back side of the hill. I went along with the plan. We enjoyed a short but rewarding ascent following by some rolling hills and seriously lovely scenery which included L’s seriously strong [read: sexy] legs and tight tush — not that I was looking. 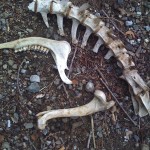 L and Big Sis picked up speed on the back side of the hill and I fell behind once again. My legs were toast from two days of hard running coupled with a lack of cycling. Seriously, the lack of cycling was the issue. How could I have let this happen?

In spite of my suckiness, it was good to be out and I was enjoying the ride. I caught up with Big Sis and L at the stop sign where a call was being made to Big Bro-in-law. It seemed that Big Sis didn’t actually know where they were after all — not exactly. The connection was unsuccessful so we chose a direction and rode onward hoping to make contact further down the hill.

It wasn’t long before Big Bro-in-law called back and righted us to his exact location. The family reunited and we rode on together. Along the way, while stopped to fix a flat on the tandem, we discovered the bones of a unknown animal. The kids were very excited at the discovery, but not as enthusiastic as Big Sis. It made for great conversation on the road back. Also, I took a few pictures with hopes that you, my internet friends, might be able to ID the mystery animal.

In case you were wondering, we did go back up that hill. I am motivated to get back on the road again soon. I must to redeem myself as a cyclist. I seriously cannot be that out of shape.

END_OF_DOCUMENT_TOKEN_TO_BE_REPLACED

Believe it or not, I do remember that I started the blog as a “running blog.”  Although you might not know from my last few posts, I am still running.  My legs will vouch for me.  They are feeling that confirmatory soreness that says, “Yes. I did.”

On Tuesday, I’d had plans to hit the “dish,” a running locale near my work that offers lovely views of the area and is just minutes from civilization.  It’s hilly but paved.  I had my bags packed and was planning a noontime run when an email from Coach chimed in.  Speed work: 1mi warm up, 8x400m @ 1:45-1:50 w/200m recovery , 1mi cool down.  I abandoned my plans and worked through lunch.  After work, I picked up YaYa and headed to the track to tackle the workout.

The track was crowded.  To my knowledge, it’s the only track in the area that is lit after darkness hits.  I settled in at lane 4 and began my warm up.  Meandering through the joggers and walkers — who have no idea about track etiquette — I gathered information on who I’d be jockeying for track with once I picked up the pace.

When the time came to accelerate, I was ready.  The biggest struggle was keeping my mind in the moment and not letting it wander off to find meaning in the other areas of my life, or even how many more laps I had to complete.  One interval — one lap — at a time was all I needed to focus on.  I huffed and puffed and pushed hard.  With each of my intervals, I was rewarded with a satisfying time.  It gave me back my “Yes, I can” attitude which I need right now.  That night, I dreamed of qualifying for the Boston Marathon (among other things).

END_OF_DOCUMENT_TOKEN_TO_BE_REPLACED

It’s been quite a journey around the calendar this last pass.  In many ways, the past year was somewhat easier than the last, but in many other ways, it has been far tougher.  I read my writings from this time last year and let the tears roll.

Once again, the year is rapidly coming to a close. On this Thanksgiving Day, I am compelled to call out the things that went right (or that were at least righted along the way).

These are just a few of the things that I am thankful for:

There is so much more; I can’t even begin to list all that I am thankful for.  God is watching over us.  For this, I am MOST thankful.

I am unsure what being I allowed to inhabit my body last night but they were very unkind and over-stayed their welcome.  I’ve got a dull, throbbing headache and am slightly sick to my stomach.  I just want to throw up and hide under the covers for a few hours..or so.