Spinning and Yoga brought together into one session or “practice”? It sounds funny at first but keep an open mind here. When you think about it more, the two activities compliment each other rather nicely. I first heard about this new trend in the fitness world from theMAN himself. It was something that he wanted to not only experience, but learn its ins and outs, then share with his students. 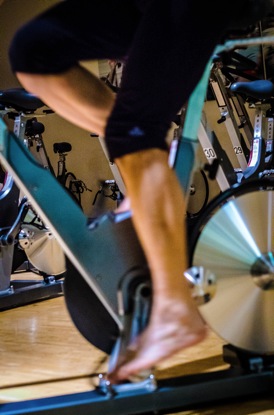 I’m not sure when he heard of it first. It may have been even before he’d even finished securing his yoga certification. He’s kind of like that: always thinking ahead and dreaming up the next adventure to bring to reality.

If anyone could make it happen, it would be him.

Even before the opportunity to create such a format formally arose, he begun incorporating a bit of yogic teachings into his spinning classes. His students ate it up. Spinning classes would begin with breath work and reminders on proper body alignment. These were things he’d done before, but now they had a yogic spin on the way they were presented. Still, the same motiving queues and music remained.

So when the opportunity to formally teach a yoga/spinning workshop came into fruition, he took the opportunity and ran with it. Delving deeper into the merging of the two worlds, his yogic teachings in the spinning studio where more easily presented. Mindfulness, alignment, pranayama, ahimsa, visualization…  He delivered it all to a kick-butt cycling profile. Then we all moved to the yoga studio where are mats awaited.

We took the same mindfulness and other principles to the mat where we worked on balance, strength, and stretching (focus where cyclists and runners tend to tighten up). It was a lot to cover in the short 2 1/2 hours he had allotted to him. His students voiced their opinion to club management.

Before he knew it, he was being asked to teach a 4-week series. Not bad, eh?

Well, today, I write this in congratulatory fashion for theMAN just completed this series. I’m so proud of him and his dedication to making it happen.

Note: The spinning portion of his sessions are not barefoot. Photo by: your’s truly (me).