Watching the doves take off at SLO’s commencement ceremonies was symbolic of these graduates being released out into the world to spread their wings and take flight on their own terms. Who knows if my interpretation matches the intended symbolism — but I quite like it. As do I like the idea of my last little bird graduating from college. 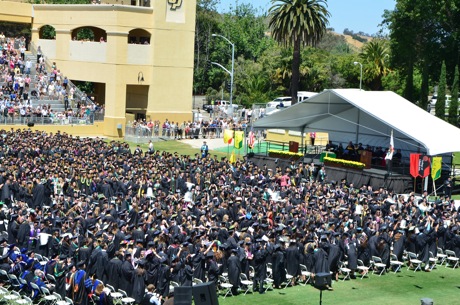 Not to downplay BoBo’s path into the Air Force. I do believe that the Air Force was truly his path. And I am glad that he found his way. It just wasn’t how I pictured it. I suppose it’s never quite how you picture it but still.

Anyway, I do want to see young YaYa go to college and emerge with a good education and confidence to spread his wings and fly. And IF he decides to go to SLO, I could probably be talked into swallowing my opinion on early morning drinking to join the 6 AM tradition. That is IF he wants to partake and if he wants ME to join him — for ONE drink.