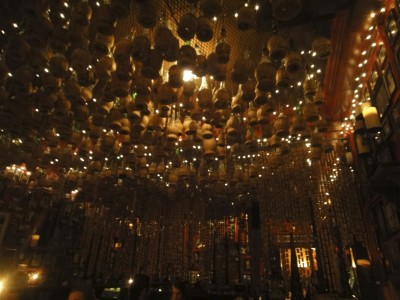 The atmosphere at the Stinking Rose restaurant in San Francisco is rather unique. Saturday night was the first time I’d eaten in this room. Just look at all the cool wine bottles and corks strung up on the ceiling. That sure is a whole lotta wine!

There’s nothing like inviting a few people over for dinner to bring out the inner-critic. Whether it is as little as two or a many as 15, I’ve always had a tough time with the whole entertaining thing. In preparing for my most recent entertaining attempt (a lasagna dinner for The Man and his family), I did my best to hold back the feelings of inadequacy. I had limited time to get the tables out, the dinner cooked, and the usual clutter picked up.

When my inner-critic began making it’s appearance, I posted the following question to FB: Why is it that we are our toughest critics? I hoped for a little more encouragement but it didn’t come. I suppose everyone was out shopping for Christmas presents. Christmas shopping will be my next encounter with my inner-critic. It always is. But that is a topic for another post.

Somehow, I managed to keep my inner-critic at bay long enough to cook up 3 large lasagnas, garlic bread, and some vegetables steamed in chicken broth. A meal as simple as this was all I could manage and I hoped that it would be enough for the folks that were included on the invite.

Meanwhile, the guilt for where I ended up drawing the line on the invites was, and still is, in full attack mode. There were so many others who I really would have liked to have included. I lost a lot of sleep over this. So much that I had to chase down my physician for a renewal of my Ambien prescription.