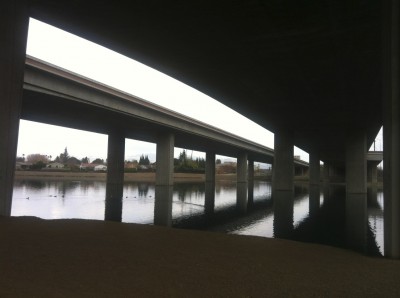 It’s interesting what will draw my attention these days. The lines created by these overpasses pulled me off the trail and down under. It was a playful challenge to see how I could angle the shot to capture the lines that yanked me from my run. Although I only had myPhone on hand, I do like the end result.

It’s the Third Sunday of Advent. Most likely, it is also the 3rd week of the church’s instituiting the new revisions of the mass service. Although I haven’t been attending mass on a regular basis, I found that I wasn’t far behind the congregation in adopting the new script. All were either saying the ingrained response (now incorrect) or awkwardly reading along with the laminated cards found in each of the pews.

I felt like I did back as child: lost. Only now, there is no one to follow as nobody seems to have a grasp (even a loose one) of the changes. And as I read new words such as “And with your spirit,” I am left wondering who came up with these words? I mean, seriously! Even after the words become ingrained, I doubt it will even sound any less awkward than it does today. And “Consubstantial”! That’s just not a word that you use everyday…or every week.

I’m missing the point, apparently. Perhaps if  I understood, I might be more willing to embrace the changes. Instead, I feel inclined to step back from something that returning to, after years of absence, truly brought me comfort in a time of extreme pain. At that time, it was the the lack of change that made me feel welcome — like returning to the home you grew up in for the holidays.

Fortunately, today’s homily spoke right to my heart. That change, was refreshing. So I guess I’ll go back.