For months now, I’ve been watching other yogis achieve Pincha Mayurasana, also known as feathered peacock. “Someday I’m going to do that pose too” I would say. I continued to observe and marvel at the combination of strength and balance they called upon to successfully pull off this pose. I kept saying “someday” yet never once did I make an attempt myself…until The Man gently reminded me of my own strength and balance. “It’s in you, Juls” he texted.

That night, a meeting kept me at the office way beyond my usual quitting time thereby causing me to miss out a planned class at the yoga studio. I decided it was time to do my own yoga “practice” at home, rather than the few random poses I generally do. After about an hour of my own yogic flow, I moved my mat to the wall and attempted Pincha Mayurasana.

I was not successful. I only gave it a few tries before realized that my energy was worn down from my long day and a serious of yogic poses which began easy but got progressively harder as I found my flow. Already I had pushed the envelope with numerous arm balances and inversions. My body was done.

The following morning, however, I found inspiration after a bit of morning meditation. While the prior evening, 3 short minutes of meditation felt like eternity. On this morning, 10 minutes wasn’t long enough. When I came out of it, I went into child’s pose for a nice stretch to my low back. It felt heavenly. I immediately launched into an easy progression of poses – just enough to warm up before making a 2nd attempt at Pincha Mayurasana.

For some odd reason, the fear and apprehension I’d experienced before was absent. In its place was a level of curiosity and trust. I placed my forearms on the floor, looked up towards the wall, kicked my left leg up and felt as my right legged followed along as if I’d done this pose many times before. Then I screamed. 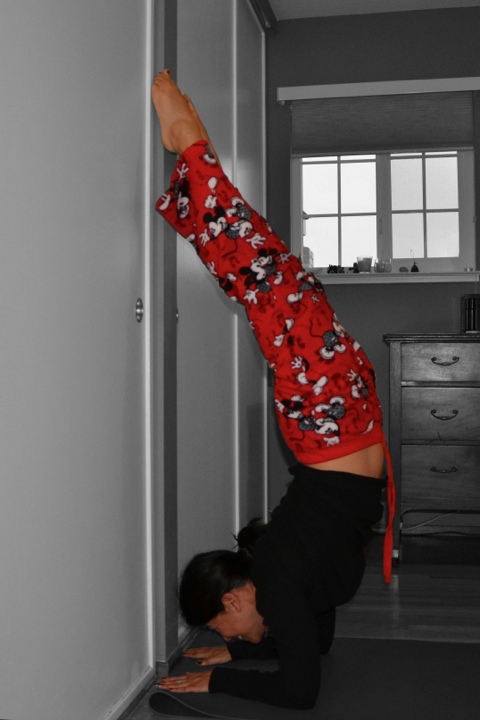 I screamed for YaYa, the only person in the house at the time of this moment of complete exhilaration, to come see. Similar to memorializing a child’s first steps, we celebrated the moment with a few snaps of the shutter.

I guess I did have it in me.