YaYa is only in 7th grade and already he has been putting in the long hours. His grades have been steadily coming up, which is good. His grades were suffering from an inability to manage football and school but he seems to be finding his way. YaYa has his sights set on a couple of the catholic high schools in the area and apparently this school year is the year that they look at when reviewing entrance applications.

This is the reason why I got YaYa a tutor this summer — because it matters and I don’t get half the stuff he’s learning. More precisely, I may know the math or other subject, but due to everything having different terms to describe it, I often get lost in the instructions.

The other day, YaYa’s tutor had to explain to me what she was talking about: an old concept now taught with new terms. The poor boy is doomed if ever I decide I cannot afford her. 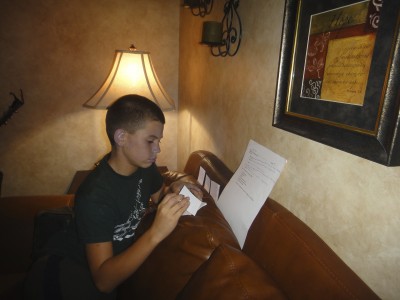 This week, at YaYa’s parent-teacher conferences, he and I met with each teacher and got the run down on his progress. Over and over they praised how conscientious and hard working his is. Forgetful and disorganized, but really trying hard.

It’s all paying off and I’m really proud of him.