My man says that if I really want to do that century in October that I need more TITS. Say WHAT?! TITS stands for time in the saddle, he explained. Apparently, the more TITS the better the ASS (aerobic strength speed). 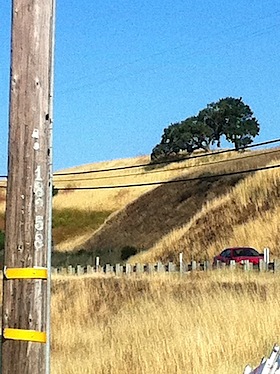 Alrighty then. I’m not one to argue with things such as this.

So…I’ve been “in the saddle,” be it in my garage (which is not exactly pretty) or on the road, and I think it just might be paying off. I’m sorry to say, I haven’t noticed any improvements where my ASS is concerned, but my legs are feeling stronger. What’s more, my comfort level has improved — with the cars and all.

It’s a good thing. Not being petrified that I’m going to be run down by a huge SUV or semi-truck means that I am a little more willing to venture out on my own. Yet, when I was somewhat tempted to take on uncharted territory, I opted to stay on roads I’d ridden before — not because of my familiarity with them but because I figured those who might come looking for me (should I not return within a reasonable timeframe) would go there first.

But I was out there! Covering 30+ miles in total, I was back in the saddle for about 3 glorious hours. And the man? Well, he’s kind of admitted to liking my TITS which is nice but, just between you and me…