For some reason, June has always been a tough month for me. Well, not ALWAYS – just in the past 4 years. I guess that’s why I keep jumping ahead to July (subconsciously bypassing June all together). Now that it’s here, I find myself dealing with emotional tsunamis that come without warning. School’s ending and summer’s arrival signal mean change. For ALL change, I must prepare myself emotionally, plan, and adapt according.

I lost my composure on Monday. Ranting about my lovely house falling apart, I admitted to one of the other baseball moms that I was mad at Tom for leaving me to fend for myself and the kids. Perhaps it was a little too honest. We are not supposed to get angry with the dead. She just nodded.

Later in the day, I found myself on my front lawn, amid a pile of tools and a rather large bottle of Stella, watering it with my tears. It was all I could manage.

By this time, frustration and helplessness continued to grow to a point where my lack of being able to utilize my running to quell my emotions was more and more of an issue.

I thought back to my conversation with the doctor about returning to running. He had advised me to wait for the NSAIDs to kick in prior to going out for a test run. The time period of which I should wait was somewhat ill-defined. Surely he did not mean that I should wait until the particular NSAID he’d prescribed hit peak-concentration. This would mean that I should wait 2-4 hours (depending on if taken with food) before running. I threw out a timeframe of 1-2 weeks for his approval. “Sure,” he said, “if you can wait that long.”

Well, I’d meant to wait until at least this weekend, just to be overly conservative. Yet, I’d not been feeling any discomfort AND had successfully resumed my other activities. Would running now be unreasonable? I thought not. After all, it had now been a full month since Big Sur.

Later on, after another emotional tsunami hit, I began drafting an email to Tom just to get my building anger “off my chest.” This was all fine and dandy until I sent it without even considering the possibility that his email address might now be assigned to someone else. Oh dear, I thought. I must be losing my mind.

Just like that, I decided it was time. I laced up my shoes and ran circles around the school where YaYa’s team was practicing. After the initial oh-my-god-she’s-running-again, my body settled in and my mind began to process the built up emotions. As my eyes welled up, my body relaxed, and I gave thanks for having the renewed ability to let go of the unwanted feelings and process the built-up stress — even if temporarily limited. 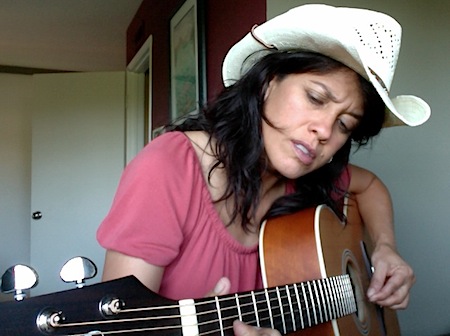 The furrowed brow should clue you in to the fact that learning guitar is not coming easy for me. I’m past the point of sore fingertips, but still struggling to make music out of my efforts. Oddly enough, the cowboy hat did not magically transform me into a country western artist. Perhaps that’s because I trying to learn a Green Day song.