On the way to school yesterday, I reiterated that disorganization and complacency do not have a spot in our world. I went on to convey my opinion that a messy and disorganized room or house will only lead to mess and disorganization in the rest of one’s life — OUR life. I thought back to the days of cluttered counters and routine dumping of “stuff” (shoes, books, keys, etc.) where ever and whenever anyone wanted when I said this.

Truly those were the days where I often cringed when I opened our front door. Not exactly the “Welcome Home” I wanted. With my home in disarray, my life felt much the same.

“It Does NOT Work!” I insisted. YaYa just nodded.

Taking the pressure off of YaYa for a moment, I noted that I had also caught a touch of spring fever. Acknowledging my recent pattern of not laying out the clothes, the meds, and the coffee the night before, I pointed out the return of the morning scramble. Once again, I stated, “It doesn’t work!” Only this time, I was speaking more to myself than to him.

That evening, YaYa insisted his homework was complete. In the same breath, he also noted a test in Science the following day. I, having utilized my big-brother tendencies for something other than obsessing over my blog traffic, had an up-to-the-minute beat on his grades. I handed him the post-it noting each one of them. His Science grade was the 2nd lowest and I was not happy.

Then, as soon as we were through the door immediately launched into action:
· I cooked got dinner while he got organized.
· I went for a run while he ate and reviewed his study guide.
· I shot him the questions while he answered them.
· I folded laundry while he tore apart the place looking for his volleyball uniform.

And although we have yet to find the uniform, we did get organized enough to skirt the morning scramble. Better than that, my daily obsessing has revealed that YaYa nailed his Science test.

Next up: Revolutionary War and bills – neither of which I have confidence in.

Although today I went to work, not the beach, life is good — and the weekend is near. It’s so close that I can almost taste it. And there is so much going on that I’m not sure I’ll be able to fit it all in. 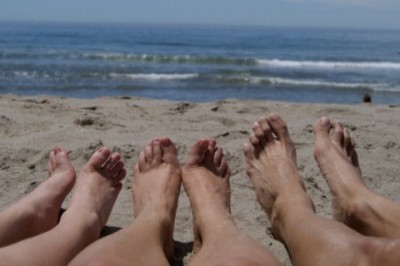 I got my toes in the water, ass in the sand

Not a worry in the world, a cold beer in my hand