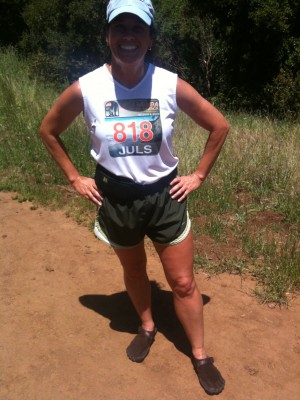 I’ve fallen in love – with my VFF’s. Love, as you may know from your own experiences, can make you do crazy things. This has been the case with me.

Over the past few days, I’ve run in my VFF’s every day. The distance run has gotten progressively longer. And, although I could feel my calves tightening significantly after day two, I still took them out to the open space today.

I’m finding that these things are quite the attention getters. I hadn’t even put on my hat when the first person approached me. “Are you going to run HERE in THOSE?” he asked. I explained that I was exploring new ground so to speak – that I had yet to run in them more than 3 miles at a time. This was run #3 and I was psyched at the “playground” feel they’ve given to my recent runs.

His name was Nick, and he asked about rocks and speed. I told him that I did feel the rocks but that the increased awareness of my footing makes it less of an issue. As for speed, I’d been noticing an ease of speed that must be the result of a faster turn over. I suspect this is due to the change in form that comes right out of the box – meaning I haven’t tried to run differently, but am.

It turns out that Nick shops at The Store. He admitted that the owner was willing to deliver a pair to his house but that he was a bit “on the fence” about them. After our short conversation, however, he was SOLD. *smile*

I quickly sent a text message to let the boss know that I was working it off duty as well.

In the short time it took me to send that message, 5 additional people had stopped to ask about my footwear. So, I inserted my headphones to let the world know that I was no longer available for Q & A and was off and running.

The run, by the way, was AWESOME! Still, my calves are telling me that the instructions advise easing into use rather than the full-steam-ahead approach I’ve adopted.

Tomorrow, will be a rest day. I promise.