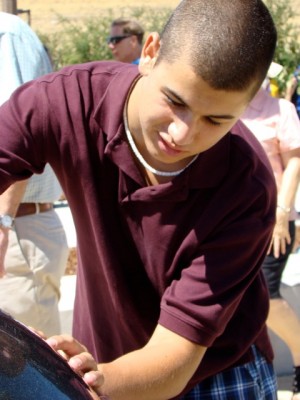 Mom asked me to show her how to sort photos on her Mac. Within minutes, I was knee deep in old photos from my old life. As the good memories came rushing back, memories of sadness and loss were also reawakened. I click – clicked through the photos, sent a few to my online album, and reflected on the past few years.

After a quick trip down memory lane, I let the pain sit and returned to the present to embrace all that is good. Thankfully, there is plenty of good these days.

It was one of those mornings when things just didn’t seem to want to fall into place.  I was late dropping YaYa at school after coming downstairs to find that he was wearing pants that were too small to zip up.  He promptly ran upstairs and came down wearing a different pair which had holes worn in both knees.  To make matters worse, for some unknown reason, he folded up the poster board assignment that he’d spent the past few days working on and shoved it into his backpack.  *sigh*

After dropping him off, I made a b-line to Peets Coffee for my soy latte.  Caffeine fixes all.  Right?  Well, perhaps not. It seemed that EVERYONE was running late.  The highway was crawling.

I sought reprieve from the highway stress in the way of music. Good music always makes the traffic seem less of problem which is why I’ve hardly been listening to anything other than my XM radio since I got my new car.  The heavy traffic made me wonder if there was an accident ahead.  So, I tuned into the local radio station — just in time for a commercial break.