One of the highlights of my trip to Southern California was running with Coach Jeff.

I was both excited and nervous at the prospect of joining Jeff and possibly members of the famed Dawn Patrol.  In fact, I was so nervous that I slept restlessly from 2 am onward.  As you can probably guess, my apprehension stemmed from not wanting to bring up the rear so severely that Jeff’s running club would ask for me never to join them again.  My only saving grace  was that the bulk of them would be coming off of a 29 mile hilly trail run (possibly longer as the measurement was per GPS.)

As it turns out, all of the RSVP’d runners dropped from the morning run by the time morning arrived.  This left Jeff, me, and one other gal to take the trails.   We took off together, exchanging small talk and introductions as we went.  Holly, a mother of two young children, had recently moved from Colorado and found the running club soon after moving. 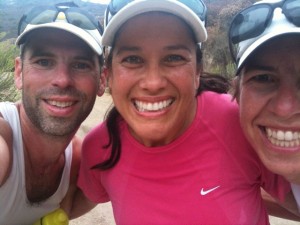 As with most non-bloggers, Holly found the internet-friendship of Jeff and me very interesting.  We explained how our children are referred to using nicknames, how Jeff has nicknames for me and a few of his other blogger/runner friends.  When I relayed YaYa’s question about Jeff’s Twitter ID, which in my confused state got switched from aginghipster to anagginghipster, we got a good laugh.  We laughed some more at the awesome strangeness of meeting up with strangers over the internet — then hooking up with them in real life and, in Jeff’s case, inviting them home to meet the wife and kid.

We meandered through Aliso Canyon sharing funny stories about carrots, my talking to myself during my runs, and what ever else came to mind.  And I almost didn’t notice my aching glutes and out of place shoe insert (later leading to a nice blister).  The run was so beautiful that I even considered joining the Dawn Patrol for one of their 5 am runs.

As we ran back, waving and greeting everyone with a friendly hello, Jeff shared his theory that those who just ran past without so much as a look were surely listening to Whitesnake.  But then, there was a lady who did this with such a peaceful and LaLa expression that we all agreed she was definitely listening to something else.  Perhaps Hanna Montana, I suggested.  Jeff and Holly, having much younger kids than me, had no idea what a Hanna Montana song actually sounded like — so I enlightened them by singing (yes, singing) The Climb.  After Jeff’s carrot story, I figured it was safe to show the side of me that actually knows the lyrics and tune to said song.  I even admitted to liking it, and identifying with the lyrics on a personal level.  Jeff followed with a catchy ABC tune that I’d never heard.

We finished our run strong and happy.

Of course, the fun didn’t end there.  That evening, YaYa and I drove to Jeff’s house and met his wife, super-model-sexy-momma-head (smsmh) and his adorable son, thunderclap (tc).  We had a delicious home cooked meal, played with cool toys, viewed the momma bird and her chicks nesting on the balcony, and watched some of Madagascar.  It was a fun filled evening for everyone.

YaYa and I left shortly after tc’s teeth brushing and story time.  The young lad, who wasn’t feeling good, thanks to a nasty cold, was quite delightful.  YaYa and I enjoyed playing with him.  As for smsmh, I can see why Jeff gave her the nickname he did — she is beautiful in more ways than one.

I feel so blessed to have such great friends in my life.  In my youth, never in my wildest dreams would I have imagined meeting up with someone via the internet but, in this case, I am so glad that I did.

And NO, I will not be doing Internet dating anytime soon.