About the time that Coach had me focusing on effort, instead of pace, I mentioned a trail run that I was interested in doing. The name of the trail run, the Mt. Madonna Challenge, said it all in the word “challenge.” After joking that all entrants would have to sing Madonna’s Like a Virgin while traveling the course, Coach suggested I sing the song to gauge running effort. That was weeks before race day.

On race day, the only singing out of me occurred on the freeway to Lil Sis’ house. We gathered up a few of her friends, and continued our trek to the run. Sis and company had previewed the course earlier in the week. The initial HILL was all the talk. I assured the gang that trail runners are smart; if the hill is truly unrunnable, the runners will walk. No problem.

Well, not exactly. While the majority of the runners did walk, this girl’s short legs just don’t keep up with most walkers. I’m not exaggerating. It seemed like I was the only one walking up that hill. Even Lil Sis, whose legs are the same length as mine, slowly but surely left me behind as we made the trek up that hill.

My calves were on fire, and I was huffing and puffing like the little engine that could. I wondered how on earth I would run when the initial HILL was behind me. Yet, somehow I did run.

The trail flattened out a bit and took us past a campground where the scent of bacon and eggs created a nice diversion from the pain. Kids looked on as I ran past and I gave a wave hello as I ran past. And then I noticed…I was running.

I picked up speed, enjoying the feel of the wind in my face and taking in the passing trees. Soon, there were runners within view again. Even Lil Sis was in and out of view. We ran. We walked. We ran again.

Best of all… we had FUN! 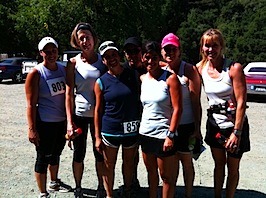