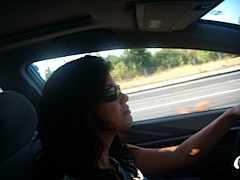 When I really want something, I have this habit of making it happen. Fortunately, there are not a lot of things that fall into the really want category. A smaller vehicle, however, has been on my list soon after my husband’s passing. Although I once begged to have it, the MommyVan had now become too large for our mini family. It’s empty seats were a constant reminder of the void left behind.

During the past couple of years, I’ve struggled with the fact that the MommyVan was paid off and still running. As time passed, however, each trip to the service department revealed an ever growing list of repairs. With one thing after another starting to fail, I became more and more paranoid to drive the MommyVan on roads less traveled during off hours. This past week, I postponed my departure to travel during daylight hours.

YaYa and I actually hit the car lots on Friday. I looked around, selected a cute little 4-door, and drove it around a bit. I even played the numbers game with one of the sales guys. When the sales guy wouldn’t negotiate on the price of the vehicle OR the trade-in offer (my van does not qualify for the cash-for-clunker program), I picked up my keys and walked.

We were essentially done at that point. However, we did hit another car lot simply to look at the new version of my choice car. Making it clear that I would not be buying a new car, I picked the brain of the sales guy. He educated me on the differing features for each model: fancy trim, nicer rims, etc.

Then came my long drive to Southern California. I clutched the wheel nervously, and prayed for a safe trip. And when the typical long-ride-knee-pain came on stronger than ever before, I took it as sign to act. 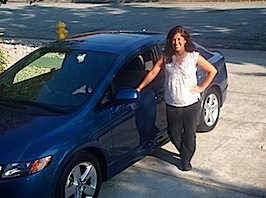 Wednesday morning, YaYa and I ate breakfast and hit Honda’s used car lot. We looked up and down the row of Civics and selected a few to check out further. I listed out the features I cared about and those which really didn’t matter to me (ie fancy rims or trim).

Soon, we were traveling down the highway. After years in the MommyVan, the small-car-feel was simply delightful. I was essentially sold but, as you well know, the process was just beginning.

Inside, we played a numbers game. The sales guy presented me with numbers, I countered, and sent him back to the room. It seemed to take forever. Meanwhile, YaYa was smiling ear-to-ear. Reminding him that we could walk out at any point, I tried to get him to wipe the smile off of his face. It did no good; the boy does not have a poker face.

Well, as you can see, I did drive home a new (to me) car. Although we are still trying to select the right name for her, she is settling in to her new home and family just fine. We love her already.