Last night was so fun. I went out with my girl friend, and 12 of her closest friends (who are now mine), to celebrate her 45th Birthday. The night was themed “The Goddess Party,” and was simply a celebration of the gifts (aka goddesses) in her life. It was by far one of the best nights I’ve had in a very long time. 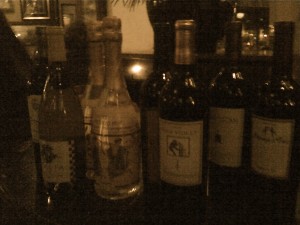 Most of the gals were decked out in their most glamourous dresses. A few of us, myself included, wore jeans and a flattering shirt/sweater. With drinks all around, we gathered in a private room at the back of the restaurant. Wendy began by thanking us. One by one, she explained how she met each Goddess at the party, and the significance they played in her life. Only a few tears were shed. Mostly, we just laughed at the stories.

Although we were tucked in a room at the back of the restaurant, our presence was well known. I am sure that we were talked up as the group of wild women in the back. They male employees each made their way in to check on us, offering their services be it more water, opening of one of the many bottles of alcoholic beverages we brought a long, or lifting the Birthday Girl up in their arms for a photograph.

Early in the night, Rose had asked me for an update on my relationship with L. I filled her in on my heartache. She was surprised to hear the sad truth and we chalked it up to stupidity on his part. “We’ll find you a nice man,” she offered. But I wasn’t keen on launching back into the search for new love. I am still hoping L will come around.

Throughout the night, my thoughts of L drifted in and out. Having sent me a text to say “have a blast tonight” didn’t help me in forgetting him. I was a little angry that he had to pop himself into the night: as if nothing had changed. And I wasn’t too drunk to know what was happening when, after describing how much I missed his incredible smell, Rose crafted a text message to ask for the name of his cologne “for my next lover.” The text was sent. I felt like shit immediately. L felt the “sting” too.

After a few (or so) glasses of wine, and with the entry of the bartender, I jumped back in on the fun. Since I was the only single one in the crowd, the girls egged me on. “SHE is single” they informed him. He welcomed me to join him at the bar. I was drunk, but not so drunk as to maintain some level of logic. Not only was he too young, this was NOT the way to find me my perfect man.

Still, it was just a little fun.

The egging on didn’t end with the bartender. Hours later, I returned from the restroom to find another young man had wandered into the room. His claim was that he got lost “looking for the bathroom.” He must not have had to go that badly as he wasn’t in any hurry to leave. He hung out with us for quite some time.

The girls, of course, pointed me out to the young man as the “amazing” woman that I am — providing him with my list of qualifications for this title. “She’s run 13 marathons,” they bragged. His eyes looked on with admiration and question. I simply smiled and nodded my head. “And she is doing another one soon.” He continued looking at me. “And she is SINGLE,” they finally chimed in. He smiled widely. This was when I got up, went around to the other side of the table, took in a warm embrace.  He was cute, smelled good, but this was wrong. The girls all screamed. Then, I told him that I was old enough to be his mother. He was a fireman, and only 24 years old and he was not L. 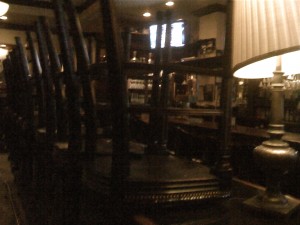 We didn’t let our young fire fighter out of the room without first taking a picture of him with all of us carrying him. He was more than eager to play along in the fun. Before he left, he asked me if I could send him one of the photos and gave me both his email address and phone number.

Unless I was grossly misreading the signs, our young fireman would have willingly rescued me from a night of loneliness.  Although I thought about how I felt when L explained that “It just happened,” I wasn’t the least bit interested in going down that sick path of vengeful sex.  It would have only served to deepen the wounds.

It was nearing midnight when the Birthday Girl, along with 3 others, headed out for some dancing while the bulk of us old goddesses headed for home. It was very late already and my cheeks and abdominal muscles ached from all of the laughter.

I have no idea why, in all of my adult life, I have never experienced a night like this. I just love the way that these women make time to foster their friendships. I haven’t done that until now. My life was only marriage and family before but I can see the value of gathering in celebration of the gifts of girls, friendship and LIFE has a lot of value.

Even minus the male factor, the night was so much fun. I believe that a night of karaoke is next.