While awaiting my sitter’s arrival, I began to rethink my training schedule. It seemed to make the most sense to up today’s run to 20 miles, step back next weekend, and the increase to 22 miles prior to taper. No sooner had I left a message on Coach’s FB page, did I get a call from my running buddy. She was not going to be joining me after all. I would be left to travel the 20 miles on my own. 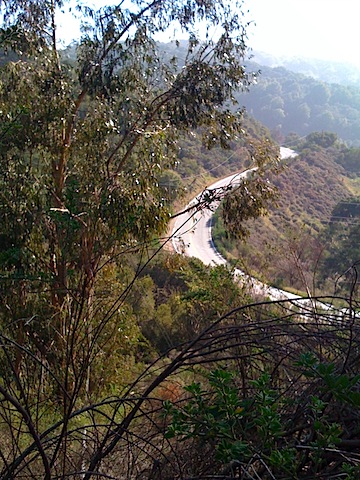 I drove out to the reservoir, strapped the camel on my back and was off and running. Up ahead, I could see another runner. He was of the opposite sex and moving along at about the same pace. I kept my pace consistent, reminding myself of the long distance. Music played in my left ear as I ran, leaving the right to listen for cars on the road. It wasn’t enough of a distraction.

My mind began to wander to the blog, as well as FB and Twitter. What would I be typing, if I was to write an update right now?

Chasing Running Guy. Apparently Running Guy does NOT want to be caught.

But, I wanted to catch him. The competitive side of me did not want to sit back and watch him running along just out of reach. I thought of L and how I tired I was getting of doing the chasing. I wanted to be the one who was being chased.

I could see the gap closing. I went for it, increasing my pace ever so slightly. I did have a long ways to travel after all.

Just when I was going to catch Running Guy, he ducked into porta-potty. I just wanted to say “Hi.” [Sheesh] Okay, I also wanted to PASS him.

I ran on, thinking that it was a little uneventful to pass someone while they were in the porta-potty. Then I heard him coming. He passed me!

So my run wasn’t exactly what I’d planned but at least there was some sort of human interaction. A little ways up, Running Guy was pointing out the thin layer of ice on the road to me. Later on, I was showing him the way around the reservoir. We stayed together, exchanging small talk for the remainder of my first lap around. Then, Running Guy headed for home while I continued on for lap two around the reservoir.

The second lap was much like the first. The bulk of the runners and cyclists were heading in the opposite direction. I greeted them as we passed and kept moving. And although the day was sunny and beautiful, the road was cold and chilly. On the back side of the loop, I was rewarded with a soft dirt trail that meandered around the lake. The trail was set just below the road, with the sound of cars buzzing along the highway off in the distance. The reservoir itself was extremely low, the result of the warm, dry winter that we’ve been having, and NOT a good sign for the upcoming summer months.

I took the dirt path toward town, noting the increase in traffic as I got closer in. I would need 4 additional miles to round off my 20 miler. Cyclists, walkers, runners and dogs all moved along the path — none of them particularly friendly for such a lovely day. I decided against returning on the same path, opting for a shaded route UP a steep hill for my return route.

This side of the route was equally as crowded, only the people were far more considerate which was a nice change. My legs reminded me of the hard work they had already put in. They were tired and sore — and the steep hill 19 miles into the run was not the reward they were looking for. I thought about how similar this was to the Napa Marathon course and patted myself on the back for my brilliant choice in running routes.