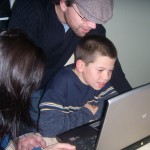 With the economy so uncertain these days, it seemed prudent to scale back on our gift giving this year. Even though this change was important and necessary, I was very uneasy about it. Different from previous years, where presents were hidden in every nook and cranny of the house, this year all of the presents fit neatly into one small corner of my bedroom closet. The collection of boxes and bags was so modest, in fact, that they went unnoticed when BoBo was searching through the remainder of Tom’s clothes for something to wear. I felt a little guilty for the change.

In spite of the modest collection of gifts, I was up until nearly 2 am wrapping them and getting them placed under the tree. Before getting to my wrapping, I had to lay down with YaYa, who could not sleep and feared that Santa would bypass our house if he was still awake. “Santa is in San Diego,” he reported anxiously after tracking Santa on the Internet. By the time YaYa fell asleep, I was ready to join him. But there was so much work to be done.

Santa arrived just after I finished wrapping up the gifts. It seemed that Santa was also following the modest Christmas theme this year. His contribution to the stack of gifts was only a single gift for the Family F to share, rather than 1-2 special gifts per family member.

One could argue that BoBo was plenty naughty this year, but he really did well to turn it around. I wondered if Santa would be impressed with his progress or not. I know that I am. He must have been pleased because, Santa ended up leaving BoBo a stash of spending money after noting that BoBo would not be able to enjoy the family gift while living in Hawaii. It was a nice thought, and I think BoBo appreciated it. 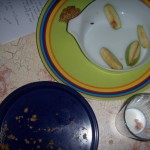 As for the stockings, Santa came through with a very specialized selection of treats for each family member, including a stocking for DD’s girlfriend.

Of course he and his crew did take the time out to enjoy the cookies and apples that we left for them. Santa also enjoyed receiving YaYa’s handwritten letter that accompanied the treats. Much to YaYa’s delight, he even wrote back.

And the grand finale was a gift which may have been more for me than anyone else… In about 1 inch of mile, Santa left the largest chunk of soggy cookie you ever did see. I don’t care what you say, it was absolutely disgusting. I nearly blew chunks of my own.

As for the modest Christmas, it turned out to be just fine. Santa really nailed the gift giving in our home. It seemed that everyone, even me, wanted a turn about becoming a guitar hero. We did a few other fun family activities, including creating personalized dinner plates together, a rousing shoot ’em up game with nerf guns at Lil Sis’, and a wonderful Christmas dinner.

This Christmas was modest in terms of the physical gifts, but it was overflowing with the gifts of love and togetherness. I hope that you holiday was equally as blessed.