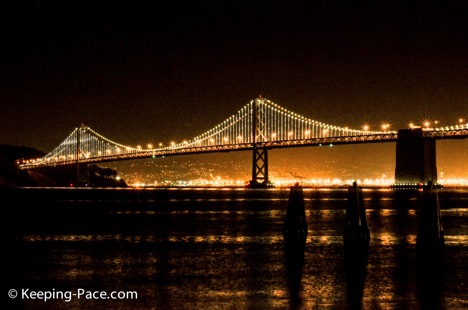 Last weekend, YaYa, theMAN, and I took a trip to the city to take in the sights of the newly-lit Bay Bridge. Inspired by the bridge’s 75th anniversary, this light sculpture is the largest of its kind worldwide. The 25,000 white LED lights, programmed by artist Leo Villareal, create a “never-repeating, dazzling display.”

And you know how I LOVE white lights.

From now through 2015, this magnificent display will shine from dusk to 2:00 am. If you have any desire to visit San Francisco, this is a must-see. Book your trip to the city now!

You can also read more about this project at www.thebaylights.org

As you all know, YaYa has been sick with sinusitis, pneumonia, and now tracheitis. At one point on Monday night, I seriously considered taking him to the emergency room. Thankfully, he didn’t panic as he was gasping for air. Similar to croup, the panic can intensify the spasm of this sometimes-fatal condition. He’s on a new antibiotic and it’s business as usual – as much as possible.

Baseball, however, is currently on hold. I feel bad for him and his team. Additionally, there is a twinge of guilt for acknowledging (to myself) that the reason I have not pushed for YaYa to continue with baseball in the past many years is that the sport reminds me of Tom and his death.  I came to this realization a few weeks ago as I walked to the sidelines (away from the crowd) to get a few photos of the team from the outfield and remembered how Tom used to hang on the outskirts like a loner. It wasn’t that he was purposely being antisocial, although he often preferred to be alone; it was that he just wanted to watch the game. He didn’t want to talk about the kids schooling, the weather, and all of the other small talk that occurs in the bleachers. He hung out on the far reaches of the field except when BoBo was on the mound. Then he would move to the back of the backstop to watch the pitches fly towards the plate.

He was diagnosed and subsequently died in the midst of the kids’ baseball season. In the remainder of the season, following his death, it was me who lingered in the outskirts helplessly trying to regain my composure and skirt the “Where have you been? I haven’t seen you in weeks” comments.

I can’t believe it’s been 6 years now. Six years and I still feel like I’m skirting the Q&A and trying the find a new relationship with baseball – sometimes. Other times, when I give up on trying to find separation from him, I think about how he’d feel seeing us doing our thing. I look at YaYa as he steps up to the plate on the “big field” and marvel at how much he’s grown. Not only is he bigger than the little 8 year old that was afraid of falling asleep for fear he too would never wake up but he really is showing signs of becoming a man. 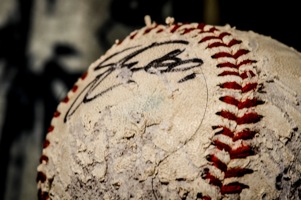 This baseball, autographed by (then) Arizona Diamondback outfielder Steve Finley, has been sitting pristine on BoBo’s bookshelf for approximately 10 years now. It was his prized possession after his father took him to his first MLB game. They arrived early enough to see the teams warming up and for BoBo to score on this ball.Unfortunately, BoBo’s young pup has made a hobby out of chewing the leather cover off of the most immaculate of baseballs in the house. I guess we should be happy that he loves feeding time far more than a young man’s most treasured autographed ball. 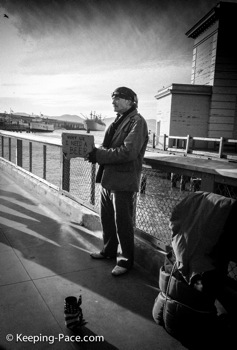 Dude! I know the feeling.

Our morning started off on a good note. YaYa, who has been struggling for a week to get his contacts in each morning, got them in without having to call for help. He is feeling better finally. I think the new antibiotics are taking effect. On top of all of this, he decided to ride his bike to school so he can get home quickly, instead of an hour after school lets out.

Why is he in such a hurry to get home today, you might ask? END_OF_DOCUMENT_TOKEN_TO_BE_REPLACED