“To die in Varanasi, on the river’s sacred banks, is to free oneself from samsar, the seemingly endless cycle of death and rebirth; it enables one to forgo further reincarnations and achieve moksha, or spiritual liberation.” – Jim Lo Scalzo, A place for the Dead and the Living, US News, November 16, 2007.

It’s no wonder that people come from near and far to spend the last days of their lives. Here they pray, wash away their sins, and die. Yes, I said “die.” In fact, each month, several thousand bodies are consumed by the fires that burn day in and day out in the cremation ghats or burning grounds. 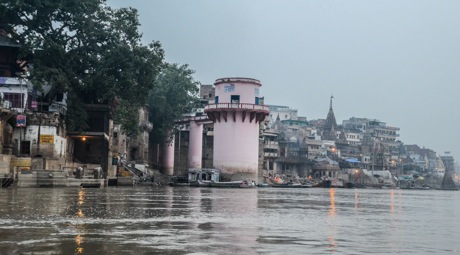 After hearing of this place, and how richly filled it is with death and the dying, I knew that it would be difficult for me to witness. Yet also knew that I must come here. Although I did not  know precisely the reason, I was acutely aware that there was a level of rebirth for me here in all of this death. Another level of healing to be worked. 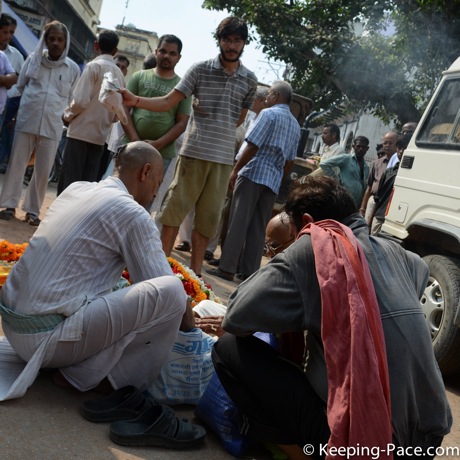 We hadn’t been in Varanasi more than an hour when we came upon our first of many encounters with death. Here, not far from the river, a family prepares to carry their loved one down to the burning grounds. The process is filled with ritual. The body is covered with colorful paper and draped with marigolds prior to being carried to the ghats. If I understand correctly, it is then washed in the river, and then carried to the cremation site for burning. The ritual continues even after the burning process. There are the ashes, which will be placed in the river at the appropriate time, and probably much more which I suspect I cannot even begin to comprehend.

There are times, perhaps when funds are too low to pay for such ritual, where the bodies are put into the river without first being burned. During our trips down the river, we encountered this as well. In fact, I unknowingly took a photo of it thinking it was an odd shaped log which had a bird sitting on it.

As it turns out, this is Life on the river ganges…and death becomes it.