This is one of those.

Running, I must admit, was the farthest thing from my mind when I woke up yesterday morning. With all of the “stuff” with my sciatic nerve, I was sort of afraid to chance it. But as my chiropractor casually asked what events where up next on my race calendar, I kind of laughed and said that I had none other than the Nike Half Marathon, which wasn’t “until October.” He actually stopped his work to look at me and remind me that “October is just around the corner.” 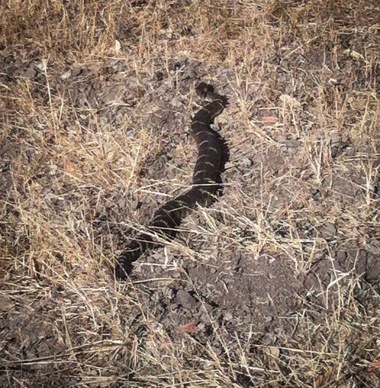 I decided to take advantage of my last day freedom from all mom related obligations and actually see what would happen if I were to run. It was exciting and, at the same time, a little scary. Okay, A LOT scary.

I don’t like hurting. I think I put up with a whole lot more of it when I was younger. These days, I’m somewhat of a wimp. Still, I wouldn’t know unless I tried.

I wasn’t more than 2 minutes on the trail when I noticed two men standing to the left of the wide foot path. They were looking at something on, or to the right of, the trail and motioning me to towards them. Moving left, I ran towards them and glanced to the right. Nothing. Then I looked straight ahead and saw a long, dark snake slowly — very slowly — making it’s way across the trail. I came to a stop as I got closer, looked down at his bulging midsection and then to the end furthest from his mouth. Sure enough, there was a rattle.

It was obvious that he’d recently had a meal and, I assumed, that the meal was either weighing him down physically or taking up a good deal of energy simply in digesting it. If they actually digest it. Not wanting to assume that he was incapable of picking up the pace to bite another victim, I waited until he was a safe distance away before taking out myPhone to snapped a photo of him. Then, I too got a move on.

When I arrived at the first of eight switchbacks, I wondered if I was taking on more than I should. Remembering the caution to ease into wearing VFFs, I second guessed my decision to run 5 hilly miles in my Treks.

My concerns quickly fell away as the beauty all around me drew me in. I told myself that it was as easy  as counting to ten, only easier as I was only counting to eight today. 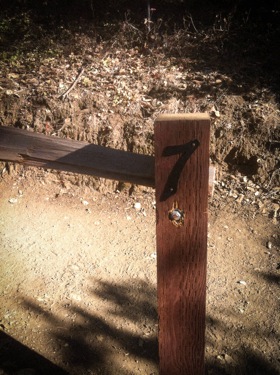 At the 2nd switchback, I noticed that there were numbers on the fenceposts at each turn. Having never noticed them before, I wondered When did these get put here? I decided that, if I were to run into another person on this portion of the trail, I wouldn’t ask. I didn’t want to let on how long it had been since I’d been on the trail. At least not while I was struggling through it.

And I was struggling.

It wasn’t an out-of-breath struggle. Nor was a physical exhaustion kind of struggle. It was a mental struggle.

I continued my count, reminding myself that switchback 4 and 5 were the longest. Or was it 5 and 6? *sigh* It has been too long.

Before I knew it, I was passing the #7 post. Switchback 8 is pretty much nonexistent. Essentially, I was there. I’d reached the top and a minute later I was stretching and enjoying view.

It was all down hill from there. Soon I was back in my car, mixing in with the last of the evening traffic, and heading home.