Watching my niece interact with this butterfly reminded me of when I was her age: young, playful, and curious. In particular, I remember chasing butterflies in the rose garden with my best friend, Cindy. I also remember giggling as we played around with eskimo and butterfly kisses. 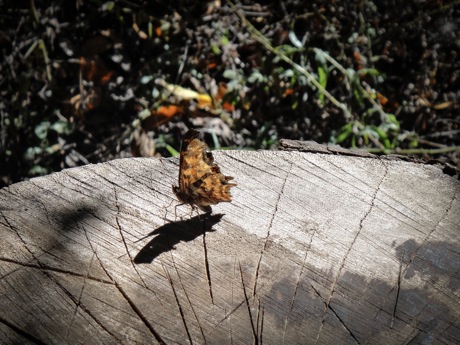 Being EXTREMELY ticklish, the fluttering of her eyelashes on my cheek (butterfly kiss) ALWAYS made me giggle. Of course that made Cindy want to do it over and over again.

As for rubbing noses for an eskimo kiss, we just thought that was kind of silly, although we did wonder if traditional kisses would indeed lead to frozen lip lock.

Isn’t childhood innocence great? Go ahead; Be child like. Exchange butterfly kisses with someone and see if they giggle too.

Occasionally, a flood of emotions rolls in from out of nowhere and knocks you down. Such was the case yesterday evening, though the sadness began creeping its way in along with the back pain that showed up just after lunch. Reminding me that I ought to have left my desk for a least a short walk, jolts of fire shot down my left leg every time I adjusted my position in my chair. By the time I was finally leaving for the day, I was knee deep in pain of every sort. The root cause, or etiology, staring me in the face.

Earlier in the day, I glanced at the calendar, preparing to turn it to the next month. July 31st was Dad’s birthday; I think he would have been 72 years old. The melancholy I was feeling was different than what everyone on FB might have guessed I was feeling. Their attempts to reassure me only served to make me shake my head. They didn’t know. How could they? I’ve only shared this stuff with you.

Sure, I was feeling grief and loss, but not for an inability to celebrate with him. He was never into that. At least not with his children. The grief I was feeling was for the loss of ever having a chance to get to know that man I called “Dad.”

The few memories from childhood of hanging out with Daddy seem to have gathered cobwebs of conflicting images that aren’t particularly pleasant. Rather than entertain these unpleasant images, I’ve let all everything become buried. Apparently, daughters are not supposed to do that on their father’s birthdays. Evidently, it is our duty to dust off the cobwebs at least once a year.