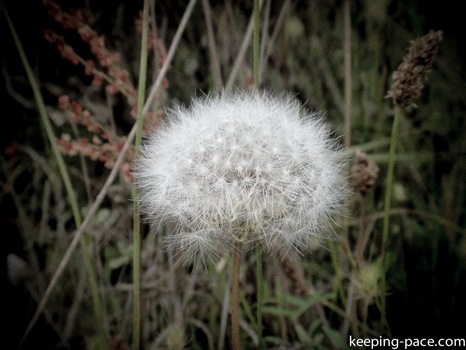 Carefully hold the dandelion.  Close your eyes and make a wish.  Then, gently blow on the dandelion to set all of the spores free.

May all of your wishes come true.

Towards the beginning of Spring, the idea that each of us yogis might use the season of Spring to plant a seed so-to-speak for something big we were creating in our lives. Further to the discussion was the suggestion that sometimes, when we have big plans, we might not be ready to reveal them to others for a time. Although I had this sneaking suspicion that my seed had been sown in my symbolic garden, I hadn’t the slightest idea what growth was in store. I just knew it was BIG. Energetically, I surmised that my mystery seed had indeed been planted and that it would be revealed to me when the time was right.

During a seemingly unrelated one on one session with Jenn, the owner and amazing teacher at my yoga studio, I asked the question: What did she see as the next step for my yoga practice? Simply put, she said for me to grow beyond the physical poses. I found the idea of becoming more spirit and less body while still inhabiting my body intriguing, interesting, and totally right on.  That conversation was over a month ago. However, it wast until last Friday that I had any idea how to even start down this path.

It was during Christy’s evening class, where I set an intention to work on just that. I kept it simple: To be more aware of myself as a spirit while I practice in the physical body. I had an feeling that my setting this intention might be a really big thing – bigger than just a single class but I wanted to see what might grow from it.