My plans to log my longish run fell through yesterday with all of the football activity. By the time a bit of free time opened up, I was exhausted from many hours of sitting in the blazing sun. Deciding the conditions were less than optimal, I put off my run until today.

When morning hit, I was feeling less than confident in my running plans. The half marathon is approaching rather quickly and I had yet to take my running onto pavement. Moreover, my mileage build has not been what it should be. The morning began slipping away as I found reason after reason to delay the inevitable: it was too cold, I was waiting for a text from Cindy regarding joining me, my blog posts needed to finalization…

By the time I finally laced up, every consideration on where to run and how far to go seemed all wrong. The truth is, I didn’t know what to do and that was not a good feeling. I was wrong, after so many years of marathon training, to be at a loss for how to proceed with training for a half marathon.

It’s not that I don’t remember all about the long run build up, fueling on the go, or any of that stuff. I know, in theory, what I should be doing. It’s the progression after so much time off, returning my feet to part-time wearing of running shoes, and ramping up without injury.

I opted for a paved bike path near home. Since all of my running until now has been on trails, I needed to test my legs with a little pounding of the pavement. Baring no bodily messages of impending doom, I’d go out and back 4 miles each way. 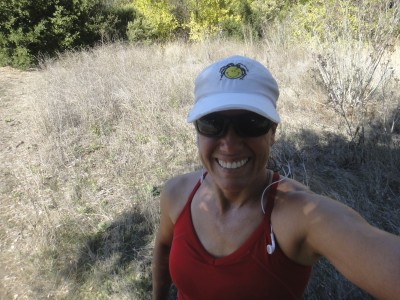 Things went as planned. Just a bit past the 4 mile mark, I turned around and headed back. Less then a mile from my car, I felt a hint of fatigue in my right ankle. It was subtle but undeniably something to keep in my awareness.

I can go so far, and that feels so good. But just a wee bit more may not have been good at all. Guess there was good reason for my lack of confidence in moving forward.