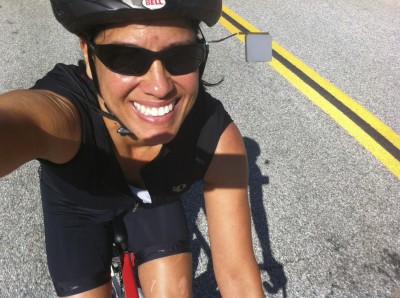 It felt a bit like Frogger as I rode through the intersection and into my neighborhood at the end of 90 miles on bicycle. I was tired but certainly not in the wrong to roll into the intersection after the last two cars had crossed in front of me. Unfortunately, the two cars behind them were playing by different rules. They didn’t have time to wait for a bicycle. I escaped unharmed and, feeling pushed around, I rode the rest of the way with extra caution.

The ride itself was good. I managed to hold up fine on 2 hours worth of Perpetuem, a packet of almond butter, some salted almonds and raisins, and (on a quick stop at home) a bowl of loaded up quinoa served with a smoothie. The entire 92 mile ride took just under 8 hours.