I wish I could tell you that my marathon training is back on track, that I’m now running easily and without incident. Sadly, that has not been the case.

On Saturday, I set out for my long run and, once again, got tripped up. Less than 3 miles from home, I was face to face with the pavement again. I was on a rock for a few minutes assessing the damage: the just-formed scab was now on the inside of my pants and blood was running down the front of leg for the 2nd time in one week. I decided that this was not to be come back day and, in tears, I called my friend, Wendy to pick me up.

Trying to analyze but not get hung up on my recent tendency towards tripping, I began asking questions of myself. My first consideration was whether or not the changes in my vision since my Lasik surgery in 2000 could be at the root of my falls. At an eye appointment later in the day, I posed the question. I knew the answer before I asked the question. Although the circumstances around each of these falls involved my looking at one thing and missing another, my vision is not so bad as to be the cause.

The more obvious etiology of my tendency towards hitting the pavement remains: I have a tendency towards dragging my right foot. While I can easily blame it on residual effects from a childhood illness, the fact is I’ve been dealing with this for most of my life. I know I do it. The bottom of my Vibram Bikilas clearly show it, as does my medical record at Kaiser. The question is, what am I going to do about it?

My main goal was to get back out there — using caution but not so much that it prevents me from enjoying the free feeling that running gives me.

That night, the skies opened up. The continuous rainfall continued into Sunday morning.  Knowing conditions would not be optimal, I began questioning the decision to head out for a trail run.  My friend, however, convinced me that it would not be too bad. Knowing the alternative would be running separately, I chose to go along with the original plan. We gathered up dry clothing and towels for immediately post-run and headed out.

The run itself was not stellar. Complicated by lingering respiratory difficulties, muscular pain at the wound site, and lack of running left me bringing up the rear.  Self-bashing thoughts that I was not good enough to run with my faster running friend further demoralized me. 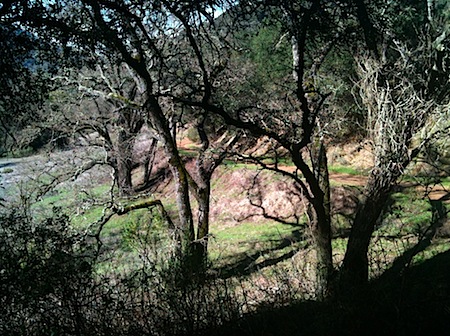 If my muscular pain not demanded a solution, I might still be out there.  In desperation, I tried using a little trick I was reminded about in yoga called breathing and visualization.

To be specific, I turned my focus to my breath. I then watched as my lungs filled, the oxygen moved into my bloodstream, and was delivered to my ailing muscle.  After beginning this process, I willed my breath to feed nutrients to my entire body (head to toes) and enjoyed the transformative process.

In no time, the pain was gone and I was beginning to find a more relaxed running pace.  Turning my attention to my exhalation, I imagined releasing the fear of further falls that kept me from letting go and enjoying the run. And that was the beginning of something wondrous and beautiful. With the wind in my face, and the crunch, crunching beneath my feet, I pick up the pace and emerged from the trees feeling awesome — as if I’d been running in an enchanted forest.

It was only 6 miles (rather than the 14 I’d had planned) but, at this point, I just want to be back running. I hope to soon find my way back on-track for toeing the line in Boston and Big Sur.