Last week YaYa’s school hosted a viewing of The Race to Nowhere, a documentary about the pressures facing American children in schools today. I knew I was in trouble when the tears started flowing. This was during the first scene.

I looked around me. The room was packed but there wasn’t anyone I knew around me. I felt so alone. Much the same as when we first came to this school. Back then, I knew that we were heading down a new path. Where this road would take us, I knew not. 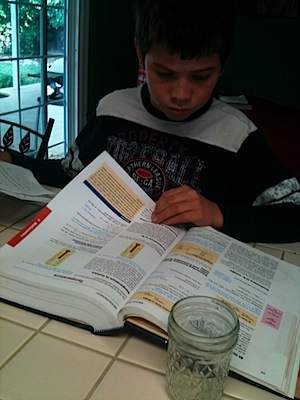 The documentary pointed out the obvious, pressures put on our children but also felt by us. We, as parents, have a lot to be concerned about.

As you know, getting into college is no longer just about academics. Kids need to show that they are well-rounded by participating in sports, showing leadership, being active in clubs, and contributing to the community. Furthermore, their transcript must include advanced placement courses as well. Oh, and let’s not forget grades.

One by one, the stories began to unfold. Family time was just the first of the many sacrifices that occur in order to meet these demands. Sleep was another common forfeiture. As early as 4th or 5th grade, the pressures of school build to a point where children no longer have time for play. By 6th grade, homework has not only stolen their evenings but their weekends too.

Believe it or not, one girl discovered that skipping dinner helped her to stay alert. She later ended up in a treatment center. She wasn’t the only one to end up in treatment. Another child suffered depression so severe that they were placed in an institution as well. These were the lucky ones when compared to the straight A student who committed suicide after receiving an F.

If you think that any of this is uncommon, you are fooling yourself. At least here in California, suicide over an inability to cope with the pressures to perform has become all too commonplace. It’s scary and it’s REAL.

Even before the movie was over I began considering how my own reaction to the demands put on my children. For years I’ve felt that my attempts to advocate for BoBo (during his schooling) had backfired. Instead of getting assistance for him, my actions resulted in creating a stigma. Before long, he bought into the notion that he was stupid when in essence his mind was was capable of churning out answers to math problems even before I finished writing the problem down. He had many strengths. His downfall: attention deficit, memory issues, and significant distractibility.

We tried did our best to help him. Tom took math and history; I took english and science. Try as we might, BoBo never seemed to fly solo. I began questioning if we were hurting him by helping him.

But it’s all too easy to get caught up in the coulda, woulda, shoulda’s. We all know that doing so is just no good. Still, a lot can be learned from past mistakes. The hard part is determining what was truly a mistake and what, under different circumstances, might have resulted in success.

I look at how differently I am involved in YaYa’s schooling. I do more hovering over the online grades than his homework. I come down on him — even when I know that he put in more time than the assignment was supposed to require. It’s always been this way. Effort doesn’t always result in success.

On the occasion where YaYa comes to me with a question, I have to tap into several resources before I can actually help him. I feel so inept and he’s only in 6th grade. How will I feel in a few years when he is in high school and his schoolwork is even harder?

Like any parent, I want my children to have opportunities open to them. Instead of having their path forward decided for them, I’d rather they have many choices from which to choose so that their journey will be on a road to happiness and success as defined by them.

If you’ve seen this documentary, I’d be very interested in hearing your thoughts. Please leave a comment or email me at keepingpace@me.com