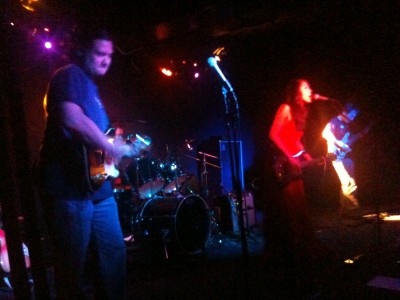 We took a trip into the city to see my cousin Jake perform. His band was 1st to take the stage — at 9:30 PM! I felt so old thinking about how tired I’d be because of it. Seriously though, Jake’s rock band put on a great show. They were followed by no 1 but 2 reggae bands that were equally awesome. Even better, the band from the islands is one that BoBo likes. Yeah, mom made the Cool List last night.

After some wine, a beer, and breathing in a bit of secondhand smoke, I was feeling pretty relaxed. My sways finally morphed into a somewhat dance-like movement which, I think, may have actually been in time to the music. I really didn’t care at that point. I was simply enjoying myself. Oh, and when a random stranger said I was “Hot,” I just laughed, thanked him, and looked over at my date who was just returning from the bar yet. He, by the way, was pretty hot himself.

Did I mention dinner? It was absolutely awesome. The night was fun beyond belief.