A friend of mine called me today to catch up on the goings in of my world.  I told her about work, the kids, and running.  When she asked if there was any other news, I replied “nothing,” knowing exactly what she was getting at.  She advised, “Well, get your hook out.”  I just laughed.  Then I went to my garage to check my tackle box.

I’ve got a few options to choose from… 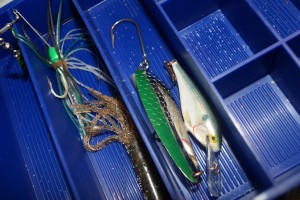 I nearly spit my coffee across the room while listening to the morning news.  The breaking news story described how 5 students at a high school had gone to the hospital after eating drug-laced brownies.  I’m sickened to think about how common place drugs in the schools appears to be. Apparently the students were only counting on marijuana in their brownies rather than the bonus substance that sent at least one into convulsions.

Hours later, I was playing yard duty at YaYa’s school.  Another day of rainfall left me roaming the hallways instead of out on the blacktop.  Popping my head into room after room, I got a chance to check out the students there.  Each class room was a different as apples and oranges, although all the students were polite and well behaved.

When I popped in on YaYa’s class, I made sure to say hello.  As usual, he was one of the last to finish his lunch. I swung past his desk to see how much of his lunch he had eaten.  My eyes nearly popped out of their sockets when I spotted the brownie sitting beside his mixed fruit.  Instead of yelling “Don’t eat the brownie!” I smiled and asked “How is that potpie?”

I’ve never been more relieved to know the man in charge of the hot lunch program.  Still, of all the days to serve brownies, it would have to be today.