For unknown reasons, my knee has been ailing me. Now that I am within reach of my marathon (12 weeks or so), I am a little nervous about backing off. On the flip side, I know that if I don’t back off, I could be forced to bail on the whole thing. I don’t want that.

On Thursday night, after the homework meltdown, I eventually made it to the gym. I swear that I wrote the other half to the story but it is nowhere to be found. Anyway, I was on the treadmill for less than a minute and felt a jarring pain along the front of my kneecap. This was, in all honesty, no surprise; I’ve been hobbling down the stairs all week. I retreated to the LifeCycle and pedaled until I’d covered twice the scheduled run-miles. The following night, I swam laps in the pool. 1,500 yards (or meters), I’m not sure which but I did it.

In the back of my mind, I figured I’d let rest my knee so I could do my long run. This morning, however, the knee did not feel any better and I was certain that another day would not make much difference. So I decided to do a bit of backyard spinning instead. Once again, I would cycle for double the run-miles. 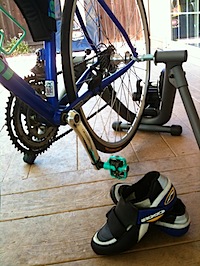 I guess you could say that it’s been a while since I’ve used my trainer: since March I believe.

It took me some time to get prepared:

I looked at my leg and found a large streak of bicycle grease (aka “rookie mark”) across the front of my thigh. On my upper arm, there was another confirming my inexperience. Whatever. At least I was doing it.

I set my iPhone playing my newly added “Anger Therapy Mix” and got my legs moving. The songs, all recommended to me via Twitter, after I posted a tweet earlier in the week, were perfect for this workout. The fresh, angsty, F-off music really got me going. I pedaled for an hour before having to go to my same old running tunes. 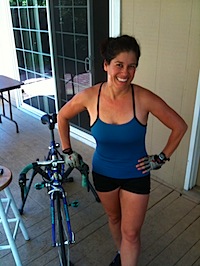 About half way through, YaYa popped his head out to say “good morning.” A few minutes later, he popped his head out to laugh at me and tell me that my out-of-breath singing was “uh, NOT so good.” This, I knew but didn’t much care.  I also didn’t care when my iPhone started and stopped as it seems to do when the earphones get sweaty.  I just set it up on the dock and continued onward.

I finished up my workout just as the day was heating up. I felt good and tired. And boy was I ever sweat soaked. I seriously looked like I had just climbed out of the pool. I felt fantastic though.

It’s been nice to mix it up.  Swimming sure felt good.  Cycling on my own bike feels good but cycling on the LifeCycle does not.  As nice as the change has been, already, I miss running.

Hopefully, the damage to my knee will heal up in a couple of days.  Tentatively, I’m planning to lap swim again tomorrow and then rest on Monday.  I am hoping by Tuesday I’ll be ready to hit the road again.