The ego, they say, has no place in yoga. This is precisely why I checked my ego at the door before entering class tonight. I was a student of an instructor I practice under all too infrequently. As such, he has no familiarity with my capabilities, weaknesses, or emotional “stuff.” But after re-introducing myself to him, and informing him of my scoliosis, I felt confident that I’d fit right in. The class was advanced but I was certain that, after the year and half invested, I was more than capable enough to roll out my mat and join the rest of the accomplished yogis.

I hardly flinched when he told me that I should attend the earlier class instead. Okay, maybe I did flinch…but I quickly let go of the feeling of inadequacy that his invitation delivered. He did not intend it as such. This, I knew. He was merely noting the focus on the spine that occurs in the other class.

At least, that is what I told myself soon after he walked away.

During the 90 minutes that followed, he was quite attentive. He circled around the class, frequently stopping by my mat to check on me and, only occasionally, assisting me to find more ease in the poses we were doing. For this, I was grateful. But I was also, perhaps even more so, thankful for the times that he checked in and walked past. I took it as confirmation that I did indeed have a place in the room.

But then it happened…

We were instructed to go into salamba sirsasana (supported headstand) with the reminder not to jump. The concept of actually “jumping” into headstand completely evaded me. I watched as he demonstrated going into the pose by lifting one leg at at time into the air. Although it wasn’t my most stable way to achieve the pose, I decided I’d comply. After all, this was his class and, more than anything, I wanted to belong.

So I ventured off my tried and true and into the land of less-than-perfectly-stable. I wobbled a bit but I arrived at the destination safe and sound and, only after a quick moment of wobbliness, found my stability.

This was when I heard him return to reinforcement of his no-jumping rule. He asked us all to come out of the pose and observe the one student who had gotten it right.

Yet, as I did my best to acknowledge the perfection of the inverted yogi, I found myself fighting off the deflated feeling that was falling over me. He glanced my way, looking right atme. And I was sure that he was talking right to me. I wanted to tell him that I could easily get into the pose, without jumping, in my own way. But I kept quiet.

Only then was I realizing that my ego had snuck back into the room — like a dog sneaks into the room after being sent out. I tried to send it out again, but lost the battle. I’d already been defeated.  When we were given the opportunity to give it another try, I held back, settling into the preparatory pose as my ego stood by telling me that I’d do my way it as soon as I arrived home. I just ignored it.

Minutes later, as I fell back into savasana, I successfully banished my ego from the room and did my best to let go of the emotions stirred up in the last 15 minutes of class. It was true; I could benefit from the other class. But I could also benefit from this class — with a little more neutrality and a lot less ego.

As the instructor guided us out of savasana, he invited us roll onto our sides. Then he urged us to acknowledge that all we had done, every bit of it, was perfect just as it was. I started crying upon hearing these words. I wished I’d felt perfect. I’d wished I’d felt even half-perfect. But instead, I felt less-than. And I crawled from the room like that same dog being banished from it.

END_OF_DOCUMENT_TOKEN_TO_BE_REPLACED

I’m so glad we opted not to power through to Rae Lakes today. Instead, we made camp in Woods Creek just on the other side of the cool suspension bridge. There is still plenty of day light left. I read a little before finding a relatively large granite rock to do a bit of yoga. I’m pleasantly surprised to have the strength and energy to do so and my practice feels amazingly zen like.

It’s been a good day.

My back has been complaining more than usual. Correction: I’ve been “more aware” of my back’s complains this week. It may be complaining just as much but how I’ve reacted has been different.

The first reason for the acute pain may be that I’ve been denying myself the use of ibuprofen. Instead, I’ve been reaching for topical arnica. Honestly, it (arnica that is) doesn’t seem to do much to alleviate the discomfort. But I’ve been on this no-NSAID kick for a couple weeks now. It’s only this week that seems to be the issue.

The bigger change this week is that I have backed off from my daily yoga routine. It’s not been on purpose. Well, not completely. There’s been a bit of competing activities requiring me to miss out on my routine: sprained thumbs from gaga ball at camp requiring doctor’s visits, cavities to be filling (now that school is out), backpacks to be loaded, and more. Additionally, I’ve been entertaining the idea that I need to rest my back for the demand of playing pack mule for 6 days. Then I think about how my trial runs carrying a fully pack have left me feeling strong and healthier than 8 hours sitting at my desk has.

And what do I get for my yoga abstinence? END_OF_DOCUMENT_TOKEN_TO_BE_REPLACED 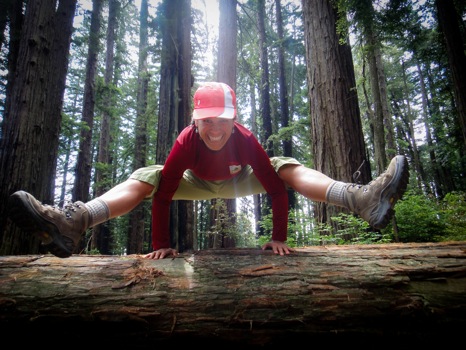 Today, theMan and I went hiking in the North Bay. In part, the trip was in preparation for an upcoming backpacking trip. Mostly, however, the outing was a much needed get away from the craziness of our normal routines. I love to be outdoors — moving, exploring, and playing.

When I’m out and about, a metamorphosis occurs. I light up from within — as if bioluminescence is taking place. I am energized. I take flight like a firefly in the forest.

In my previous life, I got a little grossed out by icky-drippy sweat. Fortunately, I suppose, the me of those yesteryears didn’t do a whole lot of sweating. These days, however, I’ve made sweating a new form of art.

I start by rolling out my mat like a canvas. Next, I close my eyes and set an intention. Then, I let the magic happen.  As I flow from pose to pose, my creative juices begin to ooze from my every pore until it has build up to a slippery mess. With the hard work behind me, I put the finishing touches on my work. Searching for the parts on my canvas that have remained unaltered for those final poses until the moment where I can finally lie back and bask in the satisfaction of a job-well-done.

Finally, I sit back up, rejoice in song, and rise to examine my creation… 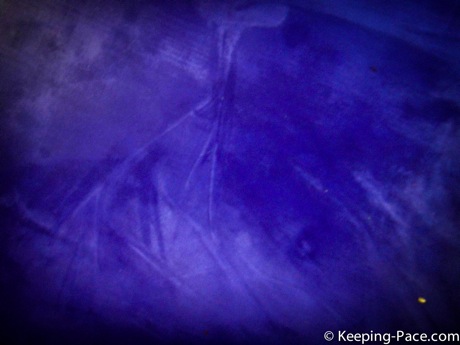