Once again, YaYa was assigned more homework that he could handle. Last night, as I was fighting back the wave of unconsciousness, he was still downstairs hard at work. Only, he was not making much headway. Boys his age are not meant to still be doing homework past 10 pm.

Unfortunately, YaYa’s schoolwork is really picking up this year. And although my upbringing tells me that he is not handling the load of school his extracurricular schedule, I know that private high schools and (in the future) colleges want only the well-rounded students. Single-minded, scholarly-focused applicants need not apply.

Reluctantly, YaYa went to bed at 10:30 pm — only after I promised that I would get him up at 5 am. Seriously! I can’t even get him out of bed at 7 am; getting the boy up at 5 am was going to be a feat in and of itself. Furthermore, I did NOT want to be waking up at 5 am. 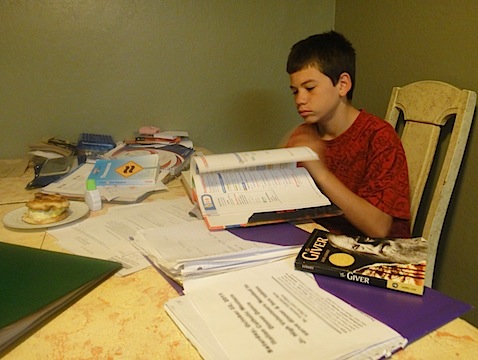 END_OF_DOCUMENT_TOKEN_TO_BE_REPLACED

YaYa’s current event assignment was the last of the homework assignments to complete. Saved for morning, when efforts would not be bogged down by a tired brain, this assignment was the most difficult of the exceptionally heavy load since the start of the new school year. YaYa insisted on setting his alarm for 5 am. I, knowing that 5 am would just be too early to pull him from his slumber, set mine for 6 am.

When the blaring sounded down the hall, it was me who woke. YaYa, true to form, went on sleeping. I silenced the alarm and told him I’d wake him in 30 minutes. He groaned and rolled over.

5:30 came quickly. Reluctant to rise myself, I yelled down the hall for YaYa to get up. Surprisingly, he did. Within minutes he was downstairs to resume his homework. I soon followed and, as a sign of support, made him a cup of hot chocolate. With two sentences typed, he was stumped on how to record the facts but not plagiarize the article. Together we worked to modify the wording so that it was both clear and his own. Not wanting to do too much for him, I left him to continue his work and went upstairs to sip my coffee in the warmth of my bed.

A bit later, I returned to check his progress. I pointed out sentences which started off using the same word — a rule that his school has for their students’ writing assignments.

At some point, YaYa began asking questions which I was at a loss to answer. Like all news items, columnist assume a base knowledge of world history and news. No matter how much news coverage you listen to or read, unless you do the research to fill in the missing holes, the full understanding is never gleaned. It’s been something I’ve wanted to do since BoBo was YaYa’s age. Back then, Tom was there to save the day. Not only did he have a complete understanding of all sides of the various issues, he also had a nack for explaining it in a manner that all could understand. The task of growing my own knowledge base is so overwhelming that I never quite start — not really. Any efforts to listen to, or read up on the news fall short — as I never quite understand the topic of discussion. Like YaYa, I have my own set of unanswered questions.

Perhaps it is me who should set my alarm for 5 am so that I can read World News for Dummies. I seriously wish there was such a thing. *sigh* Then maybe I’d be better equipped to keep up on the news here and afar.