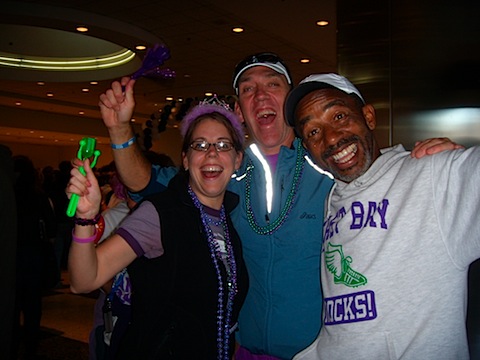 It’s hard for me to believe that my TNT experience is now over. On Saturday night, I loaded up on carbohydrates and took in as much of the TNT experience as I could.

The arrival at the pasta party was beyond words. We arrived at the conference center and walked into an entryway lined with cheering people. I’m not just talking about clapping and yelling. The coaches, mentors, captains, and honorees were lining the way to the stairwell and were ringing cowbells, clapping, and cheering. It was deafening but awesome. The crazy part was that they were all cheering for US!!! It was the first time that I truly felt the magnitude of my fundraising accomplishment. It’s all thanks to YOU.

During the dinner, various speakers entertained and inspired us including Runner World’s columnist John “the Penguin” Bingham, Olympic Marathoner Joan Benoit Samuelson, and an amazing guest honoree whose name I do not know but whose story will remain in my heart forever. To summarize the night: We laughed and we cried, and we were inspired.

From the dinner, we came back to the hotel for some good old hanging out with the girls. My TNT experience is coming in on the closure, and I am really going to miss it.

Did I mention that TNT raised 18 MILLION DOLLARS toward cancer research in the Nike Marathon alone? Wow! Way to Go Team!

It is hard to explain why I was driven to attend the funeral of a young woman whom I had never met.  I don’t understand it myself.  I just knew that I must go — so I did.

I felt a little guilty for being there: a funeral crasher.  I wondered what I would say if someone asked me how I knew her.  Even as I sat in the church, tears rolling down my face, I had no idea what the reason was for the strong connection that I had with her.  I felt like I had known her all of my life.  But as the stories were told and the pictures shown, it was confirmed that I never even met her.  I can only tell you that her spirit spoke to me.  Simply put, I just had to be there at her funeral.

She was only 27 years old when she died.  She was a teacher, a runner, and a teammate.  Like Tom, her cancer was widespread by the time it was discovered.  She fought hard, but lost the battle.  I am saddened that I never got to know this remarkable woman.  And I am truly sorry for those who did know her in this world.

I joined TNT for the purpose of giving Cancer a kick in the pants. Alone, I know that my efforts do not add up to much, but together the money raised will hopefully make a difference. I did not seek out the specific “flavor” of Cancer which took my husband. I chose the organization which has one of the biggest efforts in fighting the fight.

On days such as yesterday, when I am feeling ho-hum about my training, it is important to remember why I chose to train differently this time around. It only takes a little time to know that this is what matters most. This morning, I was given a new perspective.

I read our honoree’s update moments ago, and my cheeks are still moist from the tears. We are told that although he is still lymphoma-free, he will now begin fighting a new flavor of Cancer.

I wish there was a way to rid the world of this devastating disease. I seems to be metastasizing all over the world.

I thought about my blog post, and how I would describe my run. I worked out the little phrases I’d use and the descriptions of how I felt as I plodded along. All of those thoughts have since escaped me. I have only the following dull description of my run for you:

Having not been able to join the team for this weekend’s coached run, I made plans to do my long run early. After all, what good is a vacation if you cannot go long on any day of the week. Wendy had graciously offered to have YaYa over while I did the deed. I left straight from her home in the effort to make the best of the time available.

Just prior to the starting out, I pulled out my iPhone to select the entertainment. I was a little disappointed to find my playlists had not transferred when I switched the computer which I sync it with. I decided that a sampling from my entire music selection would have to do.

With my varied taste in music playing in one ear, and the blowing wind playing in the other, I set out towards the trail. The music acted as a backdrop to the thoughts that went in and out of my head. I evaluated how I felt about the various things that entered my mind. Was I still angry, sad, or frustrated? There was a familiarity with this exercise. It was nice to come into the present. Sometimes a song would trigger a thought, and other times it helped me to escape one.

I wasn’t breaking any records during this run, but I felt good during the majority of it. I kept to the dirt whenever it was available, and kept my pace nice and easy. My only consideration was to be back at a reasonable time for Wendy. I sent her text message updates from each of my gel stops.

As far as my knee went, I only felt a twinge on only a couple of occasions. The first was as I stepped up onto the sidewalk, from the trail, while stopping for gel. It was no different than the feeling I get when entering my own house. Another time, I felt it as I was starting up again.

Around mile 10, the “bonk” began working on me. There were several suspects to blame for my bonking. First off, I could blame my light breakfast. I have not had much of an appetite before my long runs during this training season. Secondly, I only had two packets of Hammer Gel with me. Taking into account my light breakfast, three gels would have allowed more frequent fuel replacements. Rather than water, or Gatorade, I was trying out Perpetuem. Given all of the other factors, I cannot tell whether it had a positive or negative effect on my during this run. I can say that having it, gave me a false sense of security fuel-wise. The final suspect for my bonking was my lack of exercise during the past two weeks. This is nothing that I would change; my knee needed time to recover.

Needless to say, I was not interested in doubling back on the trail when my mileage came up short. I decided that a 14 mile run would be adequate and, if I felt that 16 miles was required, I would do a short run later in the day. This proved to be a wise choice as my stomach began cramping with gas pains and I was beat. I collected up YaYa (who had a fabulous time with Wendy’s son), and headed home for some post-run pampering which included a nice long nap.

There hasn’t been a lot of running going on since my knee started ailing me. I skipped my long run and didn’t do much in the way of cross-training. By the time the track workout rolled around, my knee pain and popping had quieted down considerably.

Earlier in the week, I had managed to talk BoBo into joining me at track. Not only did I want to show off my boy, I also wanted him to kick some 20-something year old arse. My hopes, however, were knocked to the ground when the boy failed to lift his own tushie up high enough to clear a large rock which rope swinging. The resulting abrasion would not only prevent him from running comfortably, it would also prevent him from sitting. I made him tag along anyhow.

The workout started off-track with a 15 minute warm up on the trail. We returned to the track for your drills and dynamic stretching. Afterwards, we began a fartlek workout that was whistle driven. During this workout, the coach blew the whistle signaling us to run fast. He then blew it again for the runners to slow down. The whistle blowing continued at random intervals for 30 minutes.

I only felt my knee during the warm up run. I hit the track ready for an intense workout. I had wanted to show my son how hard I was trying to get back into shape. It was funny, but I wanted his approval. So, I was a little disappointed when he grabbed the keys and retreated to the van. Even though it was cold outside, and he didn’t have a jacket, I wanted him to stand by and watch.

I quickly got over the disappointment of my teen acting like a teenager, and got on with my task at hand. Once I figured out that the longest interval was only 1 minute, I was able to push myself even harder. And I was pleasantly surprised when I came up the straight to see BoBo standing on the sidelines watching me. He’d found my spare jacket in the van, and came back out into the cold. I smiled, waved at him, and kicked a little 20-something year old arse.