This is my story. It’s rather LONG but I’m sticking to it. Don’t feel obligated to read all of it. If you follow me on IG, you know how the story ends already. 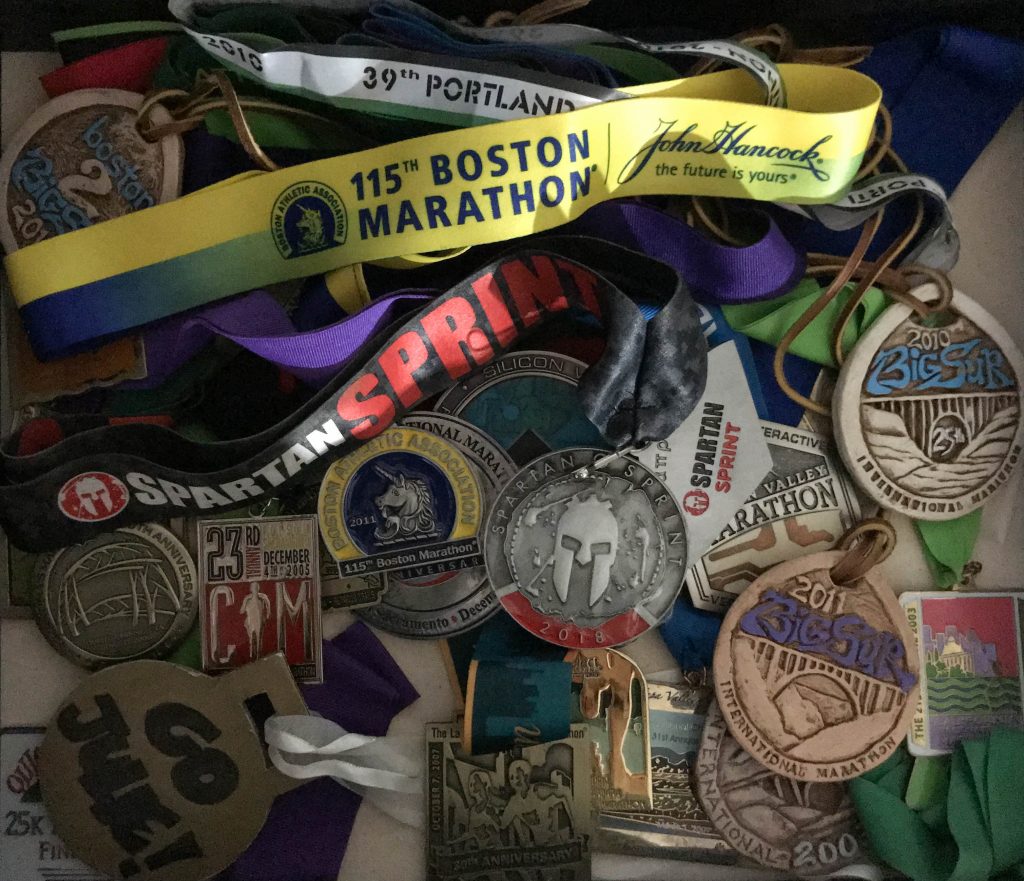 I crossed the finish line and earned my first Spartan Medal. The journey was unlike anything I’ve ever done. It was grueling but oddly fun at the same time. 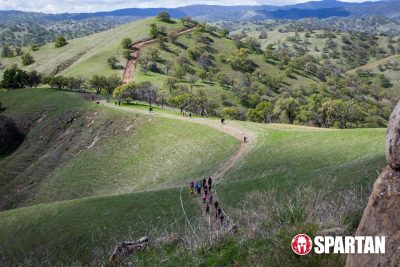 The struggle began right from the start – actually BEFORE the start. All racers must to climb over a small wall in order to enter the start corral. I quickly learned that walls are not my forte; it took me two attempts to get to the start of the race.

In the corral, we got a quick rundown on “the rules” of Spartan Racing. And after an “aroo, aroo, aroo” or two from the lot of us, we were off running towards some of the knurliest hills I’ve ever see. However, hills and obstacles are not enough grit for the Spartan Racer. Oh, no! We must have mud…lots and lots of mud! In fact, a short time after crossing the starting line, we slosh through a large pool of muddy water. This insures that our shoes and socks are soaked all the way through well before we hit the first of many climbs. I was grateful that I am still in the practice of lubing up my feet with unpetroleum jelly before all of my runs. I hoped it would help.

After getting our feet wet, literally and figuratively, there is another wall to climb. Lucky for me, a nice gentleman let me use his thigh as a stepstool after helping his girlfriend over the wall. He would not be the last to give me a boost. From here, we slip and slide our way through the large area of mud leading up to the base of the first hill. My run quickly slows to a walk, as does most everyone else’s. At the top, there is a turn and then the ascent continues. This happens two or maybe three times. At the top, we line up to take on the Monkey Bars. I climb up on the highest stool, get on my tiptoes, and grasp the first bar. One hand, then the other, the next bar, and the next, and…. Down I go. This obstacle does not have a burpee penalty, we are told, if we fail the obstacle, we must take the barbed wire path to continue on the course. I go a-crawling. No problem.

Then come the hurdles. These are 4 x 4’s angled so that the corner edge is at the point of contact (where your hands, stomach, and legs will incur the most pressure). There are four of these at varied heights. I helped, and got help with three of the four and made it over one on my own. After the hurdles we continue to go up hill. 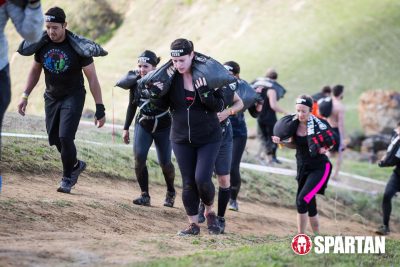 Off in the distance, I can see my fellow Spartans carrying objects on their shoulders up the hill, around a cone, and then down the other side. Yes, the sandbag carry was nearing. I mustered up a little can-do attitude by the time I arrived. I took a sandbag from one of the racers who had just come down the hill, lifted it over my head and onto my shoulders and began my walk. I was walked with poise, extending my spine and pulling in my core. Before long, I was returning the sandbag to the bin.

What goes up, must come down… 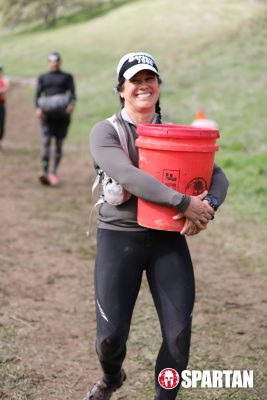 The descent began with a slanted and rough terrain. We ran a bit and then came to another stretch of barbed wire. This time EVERYONE had to crawl. Another stretch of super steep downhill took us to the bucket brigade. Similar to the sandbag carry, racers pick up a 5 gallon bucket of gravel/rocks and carry it up a hill a good ways before turning around and returning it to the start. I had to stop and squat down with the bucket resting on my thighs 3-4 times. This was NOT FUN at all. Neither was the 6 foot wall that followed.

Flat is not easy

After the 6 foot wall, we ran a bit before coming to the first of several obstacles which are more or less on level ground. The tire flip came first. I’d practiced this at the gym but wasn’t sure how I’d do being so tired. I nailed it and moved on to the plate/sled drag. I managed to pull my sled towards okay but dragging it back was a little rough. At this point, I was beginning to really feel fatigued. That’s the point, I’m sure. Next in line was the atlas carry. At this station, we pick up a big smooth round boulder, carry it across a short ways, drop it, do 5  burpees, pick it up and carry it back to the original hole.

The first obstacle in the area lined with spectators is the Olympus is this slanted wall which has hand holes, short chains, and climbing handholds across it. The base of the wall is slippery with mud and has nothing to support your feet. The object is to start at one end, using your grip strength and leg placement, get across to the other side and ring the bell before letting your feet touchdown. Here I did another help/be-helped exchange. 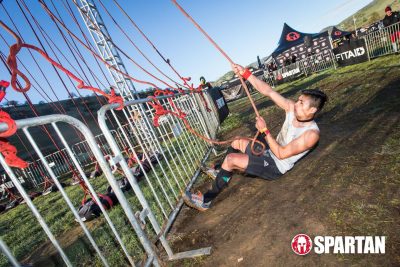 Next was the herc hoist. This sandbag pulley lift was the one obstacle I viewed on day one that left me with the impression that I was not ready to take on the race. Now, here I was grasping the rope and pulling it down with all my strength. As I pulled and saw my sandbag go up at bit, I got a little hopeful. By the time my bag was nearly to the top, I had decided that I would not give up. Here’s the deal, though. It’s not enough to hoist your bag to the top; you have to let it down slowly. If you let it drop, that’s considered a failed obstacle and you have to do the penalty burpees. I DID IT!! My moment of glory quickly faded away when I arrived at the Spear Throw. My spear did not even come close to hitting the bale of hay.

Psych! Not done yet

With the finish line in clear view, we head the other way, up a steep hill and down the other side. Of course there is another wall awaiting me, this one is 7 feet high. I get help up but the top edge feels slippery with mud and I am afraid to trust my hands to hold me as I get my second leg over. Instead, I leave my leg hooked to the top and stretch the other down towards the little ledge. Upon getting there, I lift off the other leg and step down. A few feet away was the rope climb. The rope climb was one of the few obstacles I’d been able to practice before arriving at the race. Yet, although the top was not as high as I’d feared, the rope was smaller in diameter than the one I’d been practicing with. I’d read about the diameter so I wasn’t surprised. But what did surprise me was how the mud from previous racers filled the grooves in the rope and made it difficult to not only get a hold with your hands but also to firmly secure the hook with the feet. I probably could have tried a few times, since nobody was closely policing my side of the ropes, but I decided to adhere to the one attempt per obstacle rule. I did my 2nd set of 30 burpees.

All down hill from here

Down the hill and up the other side to the giant net covered A frame. Up and over I went, carefully placing my feet and hands as I went. I felt like a car breaking down in the slow lane of the freeway and the other more confident races quickly bound up one side and down the other. I bounced up and down as they passed. I ran down a down a hill with several varied drop offs before hitting the dreaded rolling mud dunk and slip wall. I’d heard about this obstacle the day before. It is the reason why everyone is muddy from head to toe as they cross the finish. Umm. Well, at least the racers who do all of the obstacles.

I looked down at the drop into the pit of muddy, ice cold water with both dread and excitement. I was excited that I was nearly done. But I was afraid of slipping and hurting myself. Fortunately, a gentleman who went into the pit ahead of me offered me his hand. I jumped in, gasped, and thanked him. Then I crawled out…barely. On the other side was another pit of muddy water and a wall. I slid into the pit, approached the wall, took in a big breath, and ducked under to the other side. My hydration pack caught a little on the way out and my hat came whooshing off of my head. Not a pretty picture, as you can clearly see. I didn’t care; I was almost done. 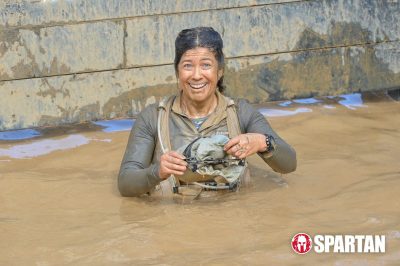 I climbed out, dried my hands on the grass, and went to the next in line. You guessed it: another wall. This one had a rope. I took hold and pulled my way up and over. The other side was a mud frosted ladder-like descent. I climbed down, wiped my hands again on the grass, and ran to the final wall. It had a couple of foot holds but was inverted and had mud all over it. I looked around for someone to ask for help. Once over, the final obstacle awaited. 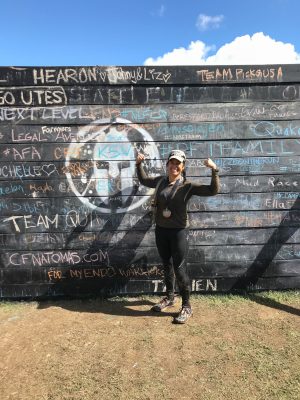 The multi-rig was a series of hanging rings, followed by a bell you must ring in order to call it a success. After hours of working the finish line the day before, I was pretty sure that my last set of burpees was coming. I gave it a try anyway. Why not? I slipped off the first ring and joined the row of racers taking their penalty burpees. I limped through the last of my pathetic burpees then made my way to the finish to get my medal. I did it! 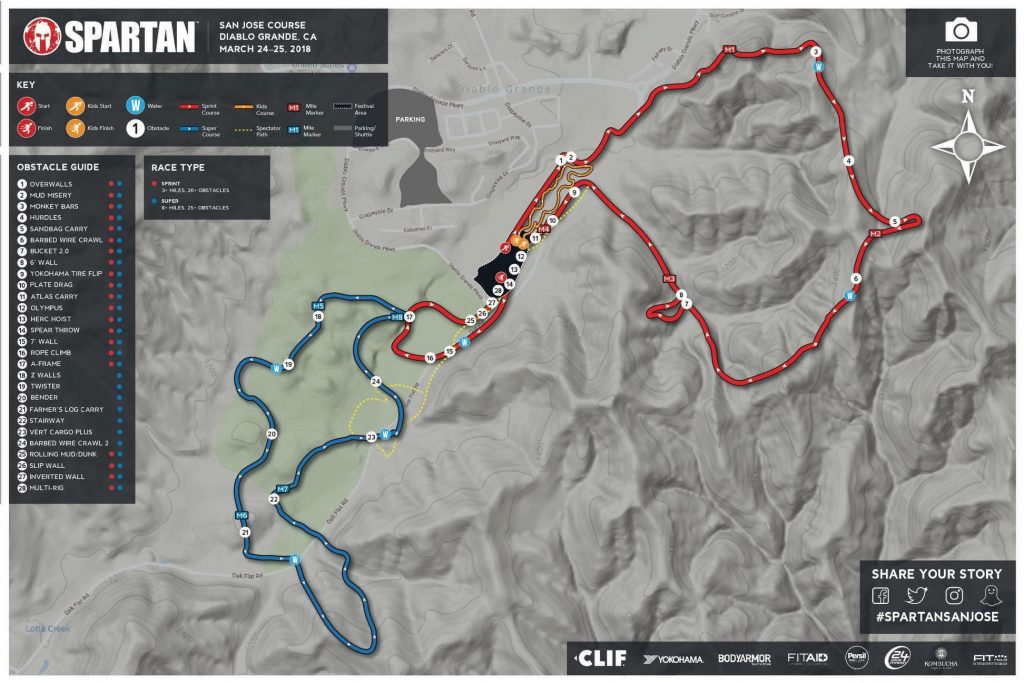 I was curious about the weights of the various items we were lifting, carrying, pushing and pulling. I found these estimations on the internet.

All vary due to materials used, adding water weight, etc. Logs have the most variance. Sandbag is the least.