A year ago (or maybe less), my brother sent a message to my sisters and I asking if we had any opinions on the ketogenic diet. My mind immediately jumped to the extreme (diabetic keto-acidosis) which I had learned about years ago when I was working in the pediatric intensive care unit. I wondered why anyone would purposely do that to their body. My brother urged us to not give our opinion if we had not done the research – although I did read a little bit on it. I remained silent.

In January, I heard that my mom and Lil Sis were starting on the ketogenic journey. With limited information at my disposal, I was in no place to give an opinion (good or bad). The fact that Lil Sis would go down that path did have me curious as she is very health-conscious and isn’t one for fad diets. We were raised thinking about fat as meat & eggs, cholesterol & clogged arteries.  Clearly, I was missing something.

Personally, over the past 15-20 years my cholesterol levels, which remain within normal limits, have slowly been trending in the wrong direction. I pointed it out to my physician because I felt like my nutrition was far better than it was in those years where it was nice and low. I have eaten a low fat diet which is balanced with fruits and veggies and all the good stuff. Even when I wasn’t running, I have remained active consistently and am, in fact more active than I was back in the days of perfect numbers. In the past 5 years, I have cut back on my caloric intake only to gain weight accompanied by painful abdominal bloating. Obviously, what I have been doing is not working.

Then, over the Saint Patty’s Day weekend, my niece came to stay with us. My niece is majoring in kinesiology and had final exams coming up quick. She also works part-time as a personal trainer. The majority of our bonding time was spent in the gym. She created a couple of circuit training sequences that we went through together. It was fun and inspiring. Sometime during the weekend, the topic of the keto diet came up. My niece said that a lot of the clients she works with have been eating keto with pretty good results. Apparently they reported feeling great while on it. My interest peaked once again.

I began doing the research. For real, this time.

On March 29th, I began the transition of cutting back on my carbohydrates and adding some fat to my diet. On April 1st, I officially committed to changing the way I eat. This was no April Fools Joke; this was serious.

I can tell you this, after a lifetime of doing [almost] everything possible to avoid fat, it’s a bit of a challenge to turn that around. Funny thing though, as I began adding dietary fat I immediately began feeling better. The bloating in my abdomen also fell away immediately. The joint discomfort that I chalked up arthritis lessoned considerably. And I felt a new sense of peacefulness in just being me. Evidently my body was agreeing with this change.

END_OF_DOCUMENT_TOKEN_TO_BE_REPLACED

Sometimes, just getting to the gym is a struggle. Fortunately, my gym is filled with people I love being around. This lady is one of my favorites. Always cheery and genuinely interested in hearing the answers to the questions she asks about you. 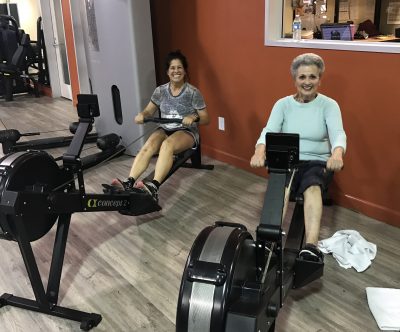 Today, Marylou asked me how to use the rowing machine. She likes spinning and zumba but her knee is ailing her right now. She says that zumba is great to keep the aging mind active.  Even though she is unable to stick with her regular routine, she still shows up here every day — working hard and greeting nearly everyone she comes in contact with (by name).