Although it was a last minute thing, I was purposely quiet about my plans to venture into Spartan Territory this past weekend. The plan was to complete a volunteer assignment, on course, during the San Jose Spartan Super. By doing so, I would get to race for free at a future event. I had tentatively signed up to race the following morning in the Sprint but figured I would decide this after examining as many of the obstacles as I could. 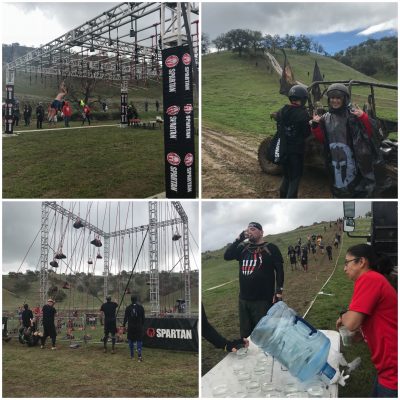 I was there an hour and a half early so I had a bit of time to look around. By the time my shift rolled around, I was pretty set that I would NOT be racing for I couldn’t see myself doing anything that I’d seen. Even the run looked daunting.

I quickly made friends with a few other Spartan Volunteers and was encouraged to “just do it.” It wouldn’t be easy but I was told that I could get help along the way. And of course, there was the burpee option. By the end of my 9 hour shift, I had made plans to return the following morning. I walked out towards the field where I’d parked my car hours earlier to find I was in complete darkness. My headlamp was IN my car and my cell phone offered very little hope of a brighter situation. What’s more, there was no cell signal for miles and miles. Did I mention that the San Jose Spartan Race is in no way near San Jose?!

So there I was, frantically waving my cell phone in the air hoping the cars driving down the nearby street would see me. They didn’t. Long story short, I found my car with the help of a tow truck who was patrolling the field looking for cars that got stuck in the muddy grass. I drove off thinking that I’d had survived the first of the many obstacles I would encounter during the weekend.

So far, I was still okay…